Flood of Syria refugees tries patience of the Lebanese 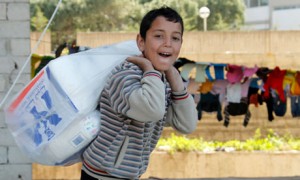 Khaled Naaman doesn’t hide his disdain for the Syrian government, a widely shared sentiment in this northern Lebanese city, where many harbor dark memories of Damascus’ years of military occupation.

His impoverished neighborhood, Bab Tabbaneh, stands as a bastion of support for Syrian rebels seeking to oust President Bashar Assad; their tricolor banner flutters from buildings and is spray-painted on walls. The district has also welcomed multitudes of refugees seeking to escape the Syrian conflict.

But now after almost two years of a steady influx of displaced Syrians, Naaman and other Lebanese citizens in Bab Tabbaneh are growing weary. Many blame the newcomers for shrinking wages and job opportunities and increasing rents and prices for groceries, car repairs and necessities.

“Syrians are everywhere and they are taking jobs,” said Naaman, a grizzled native of Tripoli in his mid-40s who ekes out a living selling vegetables, having retired from his position as a right-hand man for a now-deceased leader of one of this city’s many militias.

The anger vented by Naaman and others is indicative of a growing unease across Lebanon about the steady stream of refugees, who they fear may destabilize Lebanon’s brittle political and social balance.

Each day, as many as 1,000 Syrians enter Lebanon, a nation of 4.5 million people wedged between Syria, Israel and the Mediterranean Sea. Lebanon, about a quarter the size of Switzerland, sits astride some of the Middle East’s most volatile sectarian and ethnic fault lines.

More than 400,000 Syrians have fled to Lebanon since the uprising began two years ago, authorities say, adding to a sizable Syrian population already here.

Just a week and a half ago, the United Nations said the number of Syrian refugees across the region had topped 1 million, though that milestone had no doubt been surpassed long ago because many Syrians never register with the U.N.

Unlike in Turkey, Jordan and Iraq, other major destinations for Syrian refugees, there are no formal camps in Lebanon. Lebanese leaders are loath to go that route, recalling how semiautonomous Palestinian enclaves helped detonate the Lebanese civil war, a sectarian bloodletting that lasted from 1975 to 1990 and left about 150,000 dead and much of the country in ruins. The Syrian military entered Lebanon in 1976 and didn’t exit until 2005, after allegations it was involved in the assassination of former Lebanese Prime Minister Rafik Hariri.

Syrian refugees are dispersed throughout urban and rural Lebanon, scrambling to find shelter in a nation where the cost of living is much higher than in Syria. Multiple families cram into apartments, garages and makeshift abodes, or settle in unused schools, government structures or vacant terrain. Rent gouging is rampant, human rights advocates say. Many Syrians work as mechanics, street vendors and cooks and in other low-skill positions. They are widely exploited.

“Some Lebanese business owners take advantage of the refugees by paying every two to three Syrians the salary of a single Lebanese,” said Ibrahim Mustafa, vice president of Tawasol, a charity working with Syrians here.

Well-to-do Syrians can afford upscale apartments and hillside homes. But most new arrivals are not wealthy and are inevitably drawn to tattered precincts such as Bab Tabbaneh, a teeming expanse of multistory apartment blocks and cluttered streets that sits in the heart of Tripoli.

Here newcomers find a kind of mini-Syria, complete with Kalashnikov-wielding militiamen and shops specializing in Syrian foods. The various militias represent Sunni Muslim groups and political factions, as well as Alawites, the Shiite sect that includes Assad and his top security officials.

As is often the case in Lebanon, the refugee crisis has a pronounced sectarian backdrop.

Although the capital, Beirut, is these days touted as a liberal city of interwoven faiths, Tripoli is predominantly Sunni Muslim and conservative, the latter a trend that many say has accelerated because of the raging conflict in Syria, just 20 miles to the north. Syria’s Sunni majority population is spearheading the rebellion.

Bab Tabbaneh, an overwhelmingly Sunni area, adjoins the hilltop district of Jabal Mohsen, an Alawite stronghold where Assad’s portrait remains ubiquitous and the Syrian leader is esteemed as a bulwark against Islamic extremists.

Inter-neighborhood clashes that go back decades have intensified since the Syrian uprising ignited, leaving scores dead. Buildings riddled with bullet holes in both districts attest to the gunfights. Many residents, including Naaman, have side jobs as militiamen. Some view fighting the Syrian government and its supporters as a sacred duty.

Ali, a trained electrician who also works as a night watchman, says that occupying Syrian soldiers forced him to watch his brother’s execution during the days of the civil war. Yet Ali’s antipathy for the Syrian government has now come to include refugees, most of whom are Sunnis who largely share his scorn for Assad. Ali blames the newcomers for his economic struggles.

“I used to earn $40 a day working as an electrician, but now it’s less than $10,” said the father of five, who asked that his last name be withheld for his safety.

The shift from warm welcome to simmering resentment has not been lost on the city’s Syrian community.

Gangs of frustrated Lebanese sometimes curse at Syrian street vendors, accusing them of taking away jobs, says Abu Mohammad, who asked to be identified by his nickname, fearing retribution.

Abu Mohammad, who arrived two months ago from war-ravaged Idlib province in northern Syria, hawks oranges along Maarad Street, in a well-off area of Tripoli. He earns about $12 a day, he says, hardly enough to feed his family, including a 7-month-old daughter, and pay his part of the rent for an apartment shared with two other Syrian families.

Although he often feels humiliated, Abu Mohammad says that going back to his battered homeland is not an option.

“The Lebanese have all of Lebanon with them,” he said. “I have no one with me. If I don’t do this, what am I supposed to do?”