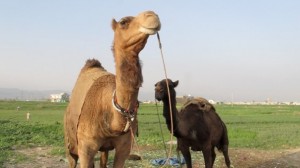 KARACHI, Pakistan — During the evening rush hour in central Karachi, Nadeem Mutloob can barely keep up with demand at his curbside Marhaba milk bar, a popular stop for workers on their way home.

Customers line up for cool bottles of what Mutloob and some medical researchers tout as an unbeatable health supplement: camel milk, or as the label says, “the world’s next super food.”

“It’s useful; that’s why they buy it,” Mutloob said.

He and others think camel milk can treat a range of ailments, including liver problems, hepatitis and diabetes.

“I use it for ‘man power,’ ” said Mohammad Ashfaq, a 36-year-old gas station employee, referring to virility.

As he bellied up to the shop’s counter, Ashfaq said his wife drinks the milk and gives it to their children, too.

And there might be something to the hype surrounding the age-old nostrum. The milk, indeed, is often used by diabetics and hepatitis patients. It has three times more vitamin C than cow’s milk and is a rich source of iron.

Nomadic Bedouins have relied on camel milk as a staple for eons; today Somalia and Saudi Arabia are the biggest producers. Processors are also developing markets in countries such as Kenya, Australia and the United States.

Karachi is at the center of the trend imported from Africa and the Middle East. Several camel-milk vendors have set up shop in the past year or so.

They range from small stalls like the Marhaba shop to a family operation called Wondermilk that offers flavors such as chocolate, banana and strawberry and takes Internet orders.

The white frothy liquid’s resemblance to its bovine equivalent does not extend to its flavor or its price.

“Tastes salty,” said Syed Sanaullah, proprietor of a shop called al-Habib, when asked to describe the beverage. The shopkeeper, 36, sells single-serve plastic bottles of milk at a roadside stand next to his small convenience store.

He said camel milk costs nearly five times more than regular milk because of shortages in supply — about $3.60 for about 35 ounces, while regular milk fetches only 80 cents. But customers who can afford it continue to purchase the milk because they are convinced of its efficacy.

A young accountant who gave his name only as Sami said he drinks at least a half bottle of camel milk every morning to ease stomach-acid problems. “I have used the milk as a medicine for the past three months,” he said.

Most of Mutloob’s customers stop by after work to pick up a supply to take home. But many also just crack open the sealed single-serve bottles and gulp the drink down as they stand on the sidewalk, wiping away milk mustaches before collecting their change and hustling off to brave the evening commute.

Camels are known for their ability to survive and produce milk even under harsh desert conditions. Researchers estimate that Pakistan has fewer than 1 million of the humped ungulates, found mainly in the arid southwestern Baluchistan province.

The U.N. Food and Agriculture Organization has noted the commercial value of camel dairy products, saying they could provide nomadic herders “a rich source of income.” The organization estimates a potential world market of $10 billion for the product.

The FAO notes that doctors are prescribing camel milk to patients in Russia, Kazakhstan and India and might be recommending it for people living with AIDS in Africa.

London’s Guardian newspaper recently reported that in Kenya, camel milkshakes and “camelcinos” (camel cappuccinos) are selling in cafes. It said camel-milk production is on par with the country’s coffee industry.

In addition to cosmopolitan Karachi, camel-milk consumption is catching on elsewhere in Pakistan, in cities such as the far less hip capital, Islamabad. There, individual sellers have been seen parking camels at the side of the road near bustling shopping centers.

While the bottled product is often boiled or pasteurized, these dairy entrepreneurs sell the milk in plastic baggies — or even offer “it-doesn’t-get-any-fresher” squirts directly from the source.