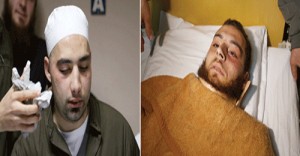 Four Sunni Muslim scholars were beaten up in two separate attacks in Beirut on Sunday night, testing a fragile peace between the sects and factions that fought Lebanon’s 15-year civil war.

Mazen Hariri and Ahmed Fekhran, both scholars at Lebanon’s highest Sunni seat of learning, Dar al-Fatwa, were attacked by a group of men in the mainly Shi’ite Khandak al-Ghamik area after they left the Mohammed al-Amin mosque in downtown Beirut, security sources said on Monday.

The two main Shi’ite parties in Lebanon, the militant Hezbollah group and Amal, were quick to condemn the attacks and handed over five suspects to security forces, the sources said. They said the five men had been under the influence of drugs.

The extent of the injuries inflicted on the Sunni sheikhs was not clear, but a photo of two of them posted on Facebook showed one in a neck brace and the other with a bruised face.

Lebanon’s civil war ended in 1990 but its political system remains based on sectarian allegiances and the country is plagued by occasional clashes between militant groups and vitriolic rhetoric from some politicians.

Lebanon’s Grand Mufti Mohammad Rashid Qabbani said on Monday the attacks were the result of a “political war” by Sunni and Shi’ite leaders. He described condemnations of the perpetrators as insufficient and demanded swift action.

Prime Minister Najib Mikati, a Sunni, said on his Twitter account that the assailants would be held accountable as countrywide protests briefly erupted late on Sunday night.

The two-year-old conflict in neighboring Syria – which pits mainly Sunni Muslims against President Bashar al-Assad, who comes from the Shi’ite-derived Alawite sect – has deepened divisions in Lebanon between some Sunnis and Shi’ites.

Lebanon-based political scientist Hilal Khashan said Syria could be implicated in the attacks as it had warned Lebanese groups not to support the uprising against Assad.

“These were two coordinated attacks. The fact that Hezbollah and Amal were quick to condemn the attacks means they wanted to dissociate themselves,” he said. “There are those in the region that want to destabilize the country, such as the Syrian regime.”

Former Prime Minister Saad Hariri warned on Sunday of the hazards of the sectarian incitement, calling on the Lebanese to exert efforts to prevent sedition in the country.

He accused the Syrian regime of being behind the attacks.

“The regime of (Syrian President) Bashar Assad wants to create tension among the Lebanese, in particularly between the Sunnis and Shiites.”

“The regime will not hesitate to use the dirtiest means to prevent its collapse,” Hariri added.

Hariri called on the Lebanese to hold on to the state and reject whatever targets their security, safety and national unity.

“We reject under any circumstances… to cover up for criminals,” Hariri stressed.

Lebanese Forces leader Samir Geagea on Monday condemned Sunday’s attacks against Sunni Sheikhs and called for calm amid the growing tension in the country.

“I call on the judiciary and security services to bring the aggressors to justice and impose appropriate penalties against them,” a statement issued by his press office quoted him as saying.

“I appeal for everyone not to block roads and [instead] remain calm and [avoid] emotional reactions that do not serve the logic of the state,” the statement continued.

Geagea added that he values Hezbollah and the Amal Movement’s rejection of the attacks.