Tensions rose in Beirut after Sunni clerics were attacked 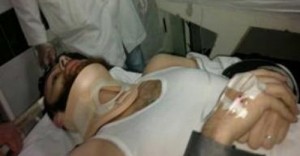 Following the incident, protesters in Sunni areas of Lebanon’s capital began blocking roads, as tension rose in the city.

Sunni Sheikh Ahmad al-Assir checked up on two of the wounded Sheikhs in the Makassed Hospital in Beirut’s Tariq al-Jedideh neighborhood, as hundreds of young men with Islamist flags gathered outside the building to protest against the attack.

As the night wore on, the Lebanese army deployed on the western side of the Kola roundabout across from Tariq al-Jedideh, the eyewitness added.

Local media outlets reported that roads were also blocked in Beirut’s Tayouneh neighborhood as well as in Sidon.

Amid the growing tension, the Lebanese army announced in a statement that it had raided the homes of men suspected in the attacks and arrested five of them.

Meanwhile, Lebanese Premier Najib Miqati wrote late Sunday night on his Twitter account, “May God protect Lebanon from these [agitations] and aggressors from any party will be held accountable.”

Hezbollah and the Amal Movement condemned the attack on the Sheikhs in Khandaq al-Ghamik, saying the incident aimed to incite strife.

Charbel described the suspects that attacked the clerics as drug addicts stressed that all Lebanese leaders have condemned the incident and the suspects will not have a political cover.