EU fails to speak with one voice on Syria 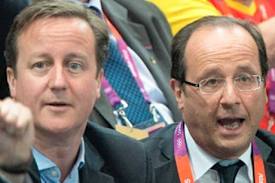 When General Salim Idriss, the chief of staff of the Free Syrian Army, visited Brussels this month his choice of outfit – desert fatigues – was a visible reminder he had come from a real war and not the budget fights or institutional skirmishes that tend to rage in the EU capital.

The general’s mission was to plead for the EU to lift an arms embargo on Syria so that member states could supply weapons to his outgunned opposition group. Whether or not that will happen remains an open question, but it is clear that the Syrian war is bedevilling efforts to forge a common foreign policy.

That endeavour was a key feature of the 2009 Lisbon treaty, which established an EU diplomatic corps, known as the external action service, as well as a high representative for foreign affairs, Britain’s Lady Ashton.

The idea was to speak with one voice on foreign matters so that Europe would still be heard on a world stage increasingly crowded by emerging powers such as China, Brazil and India.

Yet, if sharing a currency among 17 disparate economies has proved difficult, crafting a common a foreign policy among 27 nations has not been any easier. The EU has been torn between the interventionist instincts of the UK and France, two nations that still see themselves as world powers, and the inward-looking passivity of Germany, an economic giant loath to flex its diplomatic let alone military muscles. A senior EU diplomat politely refers to the “different DNA” of the bloc’s members.

Those differences were exposed in embarrassing fashion over Libya two years ago, when Germany blocked a Franco-British push to establish a no-fly zone to protect opponents of Colonel Muammer Gaddafi. France and Britain ultimately prevailed, although in a sign of public discord Berlin still abstained in a UN Security Council vote.

They were at it again on Friday at a summit in Brussels that coincided with the two-year anniversary of the Syria uprising. David Cameron, the UK prime minister, and François Hollande, the French prime minister, seized on the anniversary to try to persuade fellow leaders reconsider the embargo.

Instead, they ran into a wall of opposition from Germany, Austria, Sweden, Finland and others. “Just the fact that two have changed their position is not sufficient for 25 others to follow suit completely,” Angela Merkel, the German chancellor, said.

Ms Merkel’s statement carried some unintended irony, since Germany has in the eyes of many in Europe, done just that throughout the eurozone crisis.

The debate over Syria is not a simple matter of hawks and doves. There are well-founded concerns that giving weapons to the opposition could further inflame a conflict that has already claimed more than 70,000 lives. Arms could end up in the hands of extremist groups, as appears to have happened in Mali.There is also the risk that the conflict could engulf neighbouring Lebanon.

Mr Hollande counters that political solutions had failed, and that lifting the embargo might at least force Mr Assad to reconsider. “The bigger risk would be to let Bashar al-Assad continue slaughtering his own people,” he said.

Until now, the EU has been able to paper over its Syria differences through a policy of economic sanctions covering everything from oil exports to sales of luxury goods. With numbing regularity over the past two years, EU foreign ministers would announce fresh sanctions against members of the regime and then declare that they had “ratcheted up” the pressure.

That has run its course. A scarcity of oil revenue or Christian Louboutin shoes, while unpleasant, pales against the existential threat facing the regime.

There is also a growing acceptance in European capitals that the embargo may have backfired, since it prevents the rebels from receiving arms while government forces continue to be resupplied by Russia and Iran.

“We… are suffering the effects of the embargo without any means to defend ourselves and that is resulting in more deaths,” Mr Idriss said.

It would be better for European unity if Mr Hollande and Mr Cameron succeed at winning unanimous support for their position, as they have pledged to try to do. But the bloody truth spoken by Mr Idriss suggests they will go it alone if they must – as they usually do.