Real steps for a post-Assad Syria

by yalibnan
576
The Obama administration and the Syrian opposition are beginning to grapple seriously with the core problem in Syria, which is how to topple President Bashar al-Assad without creating a political vacuum
Share: 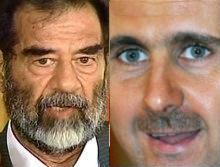 The Obama administration and the Syrian opposition are beginning to grapple seriously with the core problem in Syria, which is how to topple President Bashar al-Assad without creating a political vacuum in which terrorists, warlords and regime die-hards could thrive.

A top White House official warns that it’s crucial to avoid a Syrian version of “the Bremer problem” — by which he means the chaos in Iraq that followed the United States’ decision in 2003 to disband the Iraqi army and uproot government institutions. It’s unfair to blame the ensuing disorder entirely on L. Paul Bremer, who headed the transition there, but the White House is right to fear the anarchy that can follow regime change.

“We’ve been clear with the opposition that de-Baathification in Syria is not the answer; disbanding the army is not the answer,” says a senior administration official. He argues that there must be a process of transition that tries to keep reconcilable elements of the Syrian army and civil service intact.

This idea of a stable transition is easier to preach than to practice, especially when Syria has been fragmented by two years of civil war. But the opposition and its allies are finally taking real steps to foster security and governance after Assad is toppled.

The first key issue is creation of an interim government. Some members of the Syrian opposition coalition want to take this step quickly and claim Syria’s seat at the Arab League, Islamic Conference and U.N. General Assembly. But Sheik Ahmad Moaz al-Khatib, the head of the coalition, pulled back from a meeting this week scheduled to name an interim prime minister and cabinet. He argued that any such sudden, showy move could fragment the opposition and increase internal chaos.

Backed by the United States, Britain, France and Germany, Khatib argues instead that a smaller “executive authority” of the opposition should take the Arab League seat immediately, even as it builds new government institutions in liberated areas. Khatib also wants to assure the Syrian army and civil service that they will have a role, post-Assad.

A detailed plan for outreach to Assad’s military has been developed by Brig. Gen. Salim Idriss, the commander of the Free Syrian Army. The Idriss plan offers amnesty to “ranking officers in the Assad army” who communicate by e-mail or Skype over the next month their willingness to cooperate. Those who refuse this offer would be named on a “black list” and eventually tried for war crimes.

“We need your skills and your expertise in weapons,” says Idriss to the army defectors. In a draft of his reconciliation plan, he tells members of Assad’s Alawite sect, “Be assured that we are not seeking vengeance.” And he offers to pardon any Alawite soldiers or officers who were “forced to obey the orders to kill.”

But what about right now, on the ground? Syrian rebels have already liberated much of northern Syria, and by one estimate more than 60 percent of Syrian GDP is now under the opposition’s control. Assad’s Syria was a highly centralized state, but the fragmentation and devolution of power have begun. The challenge for the Syrian opposition and its allies is to fill this liberated space with good government and security, rather than warlordism.

The United States is also warily considering ways to provide security from air attacks for the liberated, self-governing areas. Already, Saudi Arabia and Qatar are providing some shoulder-fired anti-aircraft missiles, with the United States’ tacit blessing.

Despite these efforts to boost stability, the sad fact is that Syria is still on a trajectory toward becoming a failed state. This reality leads some pragmatists within the opposition to argue that Syria will need a transitional military government — a more benign version of the generals who ruled Egypt after the revolution and then handed off power to an elected government. Hopefully, that interim regime will have a civilian face.

Let’s be honest: When Assad is gone and Syria is finally rebuilding its state, it will need massive foreign economic and military assistance — probably including peacekeeping troops from the Arab League or even a NATO country such as Turkey. The alternative is a power vacuum in which terrorists will take root in the heart of the Middle East.