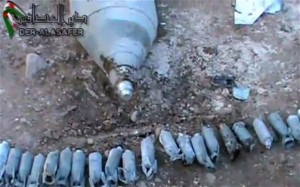 Human Rights Watch says its researchers have identified 119 locations across Syria, where at least 156 cluster bombs have been used from August to mid-February.

The result is “mounting civilian casualties,” the rights group said.

Human Rights Watch said it has investigated two cluster bomb attacks in the past two weeks — in Deir Jamal, near Aleppo, and Talbiseh, near Homs.

These attacks killed 11 civilians, including two women and five children, and injured 27 others, the rights group said.

“Syria is expanding its relentless use of cluster munitions, a banned weapon, and civilians are paying the price with their lives and limbs,” said Steve Goose, director of the arms division at Human Rights Watch.

“The initial toll is only the beginning because cluster munitions often leave unexploded bomblets that kill and maim long afterward.”

The Syrian government did not immediately respond to a CNN request for comment.

But in October, the Syrian armed forces denied the possession or use of cluster bombs.

The Human Rights Watch report is based on field investigations, analysis of video footage posted by activists and eyewitness reports, it said.

The collection of data does not include details of casualty numbers but many deaths and injuries have been documented, the group said.

“Remnants of at least 156 distinct cluster bombs have been identified so far from the video footage,” the group said.

A local activist who witnessed to the alleged cluster bomb strike in Talbiseh on March 2 uploaded video of the attack and its aftermath to the Internet, Human Rights Watch said.

The activist was subsequently interviewed by the group to corroborate the video evidence, which appeared to show the munition breaking up in bomblets.

“I heard people screaming,” he told the group. “I ran toward them and found out that one of the streets where the bomblets dispersed had people in it at the time. When I reached the house, I saw heavily wounded children inside. The children had been inside the house when the bomblets entered the walls and exploded.”

“After helping out the injured we found three people killed in one of the nearby houses. They were from the same family. The bomblet exploded next to them, we saw remnants.”

The bomblets from two bombs dispersed across seven streets, he said.

The activist said at least four men had died in the attack and 26 people were injured, half of them women and children. All of the casualties were civilians, he said.

Many people have not been able to leave Talbiseh because it’s under siege by the Syrian army, he claimed. Rebel Free Syrian Army troops are based half a mile away but are not present in the town, he added.

“Civilians continue to be at the receiving end of increasingly frequent indiscriminate attacks by Syrian government forces,” Amnesty said in a report Thursday.

“Internationally banned cluster munitions are being used daily against civilian residential areas in towns and villages, in utter disregard for the most fundamental principles of international humanitarian law.”

The report said the “vast majority” of abuses were committed by Syrian government forces, but that rebel groups are also carrying out abuses such as kidnapping and summary executions.

Syria is not one of the 111 states worldwide that have signed up to the Convention on Cluster Munitions, which bans their use. The United States is also not a signatory.

Cluster munitions are widely viewed as unacceptable because the bomblets spread across a wide area and make no distinction between civilians and fighters.

“The use of cluster munitions leave behind large numbers of dangerous unexploded ordnance,” according to the Convention on Cluster Munitions website.

“Such remnants kill and injure civilians, obstruct economic and social development, and have other severe consequences that persist for years and decades after use.”

The Syrian army “does not possess such bombs,” it said, adding that the media reports were “aimed at diverting the public opinion from the practices of the armed terrorist groups against civilians.”

CNN cannot independently verify death tolls or other accounts of violence in Syria.

Last month, U.N. High Commissioner for Human Rights Navi Pillay said about 70,000 people had been killed in the two-year-old conflict.

The Syrian army continued to hunt “terrorists” — its description of rebel fighters — in several areas on Saturday, including outside Damascus and Homs, and in Idlib province, the Syrian Arab News Agency reported.