Syria threatens to strike at rebels in Lebanon 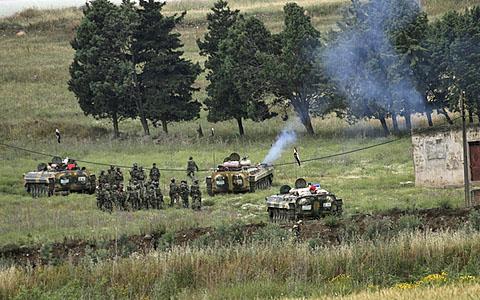 Syria has warned it may strike at rebels hiding in neighboring Lebanon if the Lebanese army does not act, the state news agency SANA said on Friday.

Syria’s Foreign Ministry told its Lebanese counterpart late on Thursday that a “large number” of militants had crossed Lebanon’s northern border into the Syrian town of Tel Kalakh over the past two days, SANA said.

“Syria expects the Lebanese side to prevent these armed terrorist groups from using the borders as a crossing point, because they target Syrian people and are violating Syrian sovereignty,” the diplomatic cable said.

It said Syria’s “patience is not unlimited”, even though “Syrian forces have so far exercised restraint from striking at armed gangs inside Lebanese territory.”

Fighting near the border resulted in a large number of casualties, SANA said, before the gunmen retreated into Lebanon.

Lebanon has a policy of “dissociation” from the two-year civil war in Syria but officials say they feel their country is increasingly at risk of being dragged into a conflict that the United Nations says has killed 70,000 Syrians.

“The international community should recognize that the Syrian crisis represents an existential threat to Lebanon and should show Lebanon … much stronger support than has happened until now,” he told reporters in Beirut.

France and Britain will urge European Union governments to lift an embargo on supplying weapons to the Syrian opposition, President Francois Hollande said on Thursday, warning that France could go it alone if no EU agreement is reached.

More than one million Syrians are believed to have taken shelter in Lebanon. They live among a nation of 4 million, which fought its own devastating 1975-1990 civil war and whose own sectarian tensions between Christians, Sunni and Shi’ite Muslims have been heightened by the fighting in Syria.

Tensions between Lebanese groups that support the Syrian opposition and those that support Syrian President Bashar al-Assad have been intensifying and have sometimes turned violent.