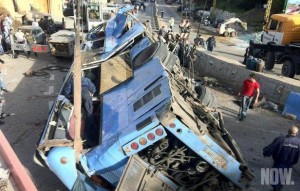 At least eight Syrian refugees were killed and 29 were injured early Friday morning when their bus overturned in the Aley town of Kahale just east of the capital, according to local reports.

The bus was headed to the Lebanese capital, Beirut, when the accident occurred.

The bus had Syrian licence plates from the northeastern Hassakeh province, which recently witnessed heavy clashes.

Voice of Lebanon reported that the bus was driving at a high speed, and that three children were among those injured. They all have been taken to hospitals for treatment.

The injured were taken to the Al-Iman Hospital in Aley , Hotel Dieu De France Hospital in Beirut’s Ashrafieh, the Levant hospital and the Lebanese Canadian hospital in Sin el Fil near Beirut.

More than one million Syrians are believed to have taken shelter in Lebanon. They live among a nation of 4 million.