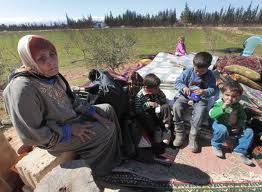 Syria’s two-year civil war has made 5 million people into refugees or aid recipients and left virtually no safe areas for civilians, the United Nations said.

“Significantly more” than 4 million Syrians are in need within the country and a further 1.1 million have fled abroad, said Radhouane Nouicer, the UN’s regional humanitarian coordinator, in a statement marking the second anniversary of the uprising against President Bashar al-Assad’s government.

“The civilian space is eroding as there is almost no place deemed to be safe,” he said in the statement, noting that aid funding was inadequate. “It is not possible to meet 100 percent of the needs with only 21 percent of the funding required for the first half of 2013. That math just doesn’t work. It translates into less food, fewer blankets, fewer medicines, less clean water.”

Peaceful anti-Assad protests that began in 2011 have developed into a civil war that’s killed at least 70,000 people by UN estimates. Attempts by the U.S., France and Britain to force UN Security Council action against Assad have been stymied by Russia and China.

Unless funding is increased to aid Syrian civilians, “some activities will not get off the ground or will simply stop,” Nouicer said. The funding gap for Syrians who have fled their country is $700 million, Antonio Guterres, the UN High Commissioner for Refugees, told reporters in Beirut today.

“There is no way a gap of this magnitude can be filled with current humanitarian budgets,” he said. “We are witnessing not only a humanitarian tragedy, but also a threat to international peace and security.”

While Germany believes that aiding the insurgents is the only means to pressure Assad’s government, the question remains “how,” Peschke said.

Civil conflict means “health standards have fallen dramatically, medical facilities have been targeted and health workers killed, intimidated or detained while trying to save lives,” Robert Mardini, the International Committee of the Red Cross’s head of operations for the Near and Middle East, said in an e-mailed statement today. “Property and infrastructure have been severely damaged, leaving large areas in rubble.”

Meanwhile, the Red Cross is being denied access to detainees by the Syrian authorities.

“We have no first-hand information on the situation of detainees and this is very worrying for us,” Mardini said.

Opposition groups are marking the anniversary of the civil war — and the deaths of about 5,000 people each month — with candlelight vigils in cities around the world.

Hampered by a lack of coordination and weapons, rebel forces have made little progress in expanding zones under their control, the London-based International Institute for Strategic Studies said yesterday. A divided opposition has twice canceled meetings to elect an interim government this month.

Damage to infrastructure is increasing, and has reached at least $80 billion, an impossible bill for any new government, Abdullah al-Dardaria, a former Syrian minister for economic affairs, who is now working on a UN-backed reconstruction plan, told Lebanon’s Daily Star newspaper.

Syrian protests that began in the southern town of Deraa called on Assad to reform, not resign. His forces responded with gunfire, saying demonstrations were led by armed criminal gangs.

The conflict has increasingly developed along sectarian lines, with many Sunni Muslims, who comprised 60 percent of the population before 2011, supporting the opposition while Assad is backed by members of his Alawite community. Kurds, Christians and Druze are also involved in the conflict.

If the war is not stopped, “there will be an explosion in the Middle East,” Guterres said.