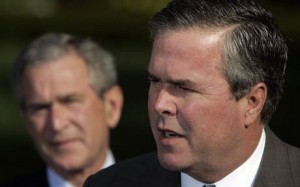 Former Florida governor Jeb Bush praised his brother’s presidency, suggesting history would view it favourably, as he made a tour of the Sunday talk shows aimed at getting his own 2016 White House run back on track.

One of the biggest obstacles facing him if he is to mount a White House run could be his name. There is some resistance in the US, a country proud of its democratic credentials, to electing a third Bush into the White House. But the main problem is the negative feelings still arouse by the George W presidency.

Seeking to confront that issue, the former Florida governor told NBC: “In his four years as president a lot of amazing accomplishments took place. So my guess is that history will be kind to my brother, the further out you get from this and the more people compare his tenure to what’s going on now.”

Bush’s hints that he is considering a White House run coincides with the 10th anniversary of the Iraq invasion, the most controversial decision of George W’s two terms. His father’s presidency is normally seen in a better light, though his decision to stop the first Gulf War in 1991 after the liberation of Kuwait is also seen as controversial, as was reneging on his pledge not to raise taxes.

The former Florida governor tends to be viewed more warmly within the Republican ranks than either his brother or father, with his stint as governor regarded as a good template for modern Republicanism, particularly his good relations with the state’s Latino population.

The man himself said he had not yet discussed a run with his parents.

Bush spoke on all the main Sunday talks show, an unusual media blitz. It was partly aimed at trying to undo the stuttering start to a perspective White House campaign last week, when he backtracked on his long-standing support for a path to citizenship for undocumented workers, the majority of whom tend to be Latino.

Married to a Mexican-born woman, his support for immigration reform has left him in good standing with a demographic group the Republican needs to begin winning over if it is to improve its electoral chances for both the White House and Congress.

But in a new book published on Tuesday, Immigration Wars, which he co-authored, Bush backed away from a path to citizenship in favour of the more limited residency rights. This was interpreted as Bush pandering to the Republican right as part of his campaign for the presidential nomination.

But within hours he changed position again, saying that the book was written last year, before Republican figures such as senator Marco Rubio, already seen as a frontrunner for the party nomination, came out in support of a path to citizenship. Bush re-aligned himself with Rubio and other Republican senators.

Asked about a 2016 run, Bush told CNN he had considered a run in 2012 and decided it was not appropriate. “Now, I’ve decided to defer any consideration of it until the proper time to make those kind of considerations, which is out, you know, more than a year from now, for sure,” he said.

He added: “But I’m excited that I think we’re seeing the renewal of the conservative movement in the Republican party and I want to be part of that, for sure.”

In a sign that Bush is seriously contemplating a run, he managed to squeeze into the interview what sounded like a embryonic manifesto. “I would argue an opportunity society kind of agenda is what we need, something that’s more aspirational, a real focus on transformation of our education system, a tax code that doesn’t penalise aspiring small business owners, a regulatory system that only makes large companies able to comply and small business is choked off,” he told CNN.

“The right to rise ought to be at the key of what we’re proposing.”

Asked whether he thought the negative public perception of the Iraq war would change, Bush said: “Yes. You know, a lot of things in history change over time. I think people will respect the resolve that my brother showed, both in defending the country and the war in Iraq. But history will judge that in a more objective way than today. The war has wound down now and it’s still way too early to judge what success it had in providing some degree of stability in the region.”