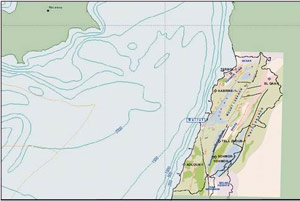 Vast reserves of crude oil and gas have been found off the coast of Lebanon. The discovery has drawn a “stampede” of global oil companies and could redraw the energy landscape of the region, the UK Times reported on Monday

Spectrum Geo, a British surveyor, has identified offshore deposits that would make the country one of the leading natural gas producers in the Mediterranean, dwarfing recent finds in Israel and Cyprus, the report added.

The chief executive officer of the Spectrum Geo Inc. David Rowlands was reported by Times as saying:

“The value of the gas and crude oil reserves in Lebanon is worth $140 billion… [Our] company has found [in Lebanon] a quantity of oil that could make the country one of the biggest gas producers in the Middle East”.

Rowlands also said that 120 companies showed interest in drilling for oil and gas in Lebanon, “which is a great jostle that has not been witnessed since Libya opened the way for gas exploration in 2004.”

Meanwhile, Malcolm Graham Wood, the oil and gas adviser for VSA Capital said that the gas reserves in Lebanon amount to more than 25 trillion cubic feet.

“I think that the gas reserves amount to much more than 25 trillion cubic feet, and all [gas companies] are interested in this wealth,” Al-Arabiya quoted Wood as saying during an interview with the UK Times.