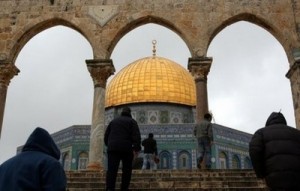 Palestinian political and religious leaders on Sunday stressed that US President Barack Obama should not visit the Al-Aqsa mosque compound in Jerusalem in a way that might compromise its “Muslim sovereignty.”

Obama will be arriving in Israel and the Palestinian territories in the spring, and Palestinian media is speculating that he will visit the contested site, referred to as the Temple Mount by Jews and Al-Haram Al-Sharif by Muslims.

It houses both the Dome of the Rock and Al-Aqsa mosques, and is venerated by Jews as the site where their ancient temples stood before the Second Temple was destroyed by the Romans in 70 AD.

The Old City complex is controlled by the Islamic authority known as the Waqf, which allows non-Muslims entry to the site only through one portal, the Mughrabi Gate, where Israeli police monitor visitors.

Sheikh Akrameh Sabri, head of the higher Islamic council and former Grand Mufti of Jerusalem, said that Obama must enter through a gate that was not under Israeli auspices.

“Any visitor is welcome to Al-Aqsa, but they should follow the regulations of the Waqf and enter through the Lions’ Gate and not through Mughrabi Gate, to ensure Muslim sovereignty,” he said at a press conference in east Jerusalem.

Hatem Abdel Qader, who heads the Jerusalem portfolio of the Fatah movement, said Obama’s visit should be co-ordinated with the Palestinians and Jordanians.

Israel seized east Jerusalem from Jordan in 1967, and the Al-Aqsa complex has since remained under Jordanian religious control.

“The visit shouldn’t have a political theme to it because Al-Aqsa belongs to Muslims only and it is their place of worship and we refuse that any Israeli official accompanies the visitor,” said Sabri.

The head of the Islamic Movement in Israel, Sheikh Raed Salah, said the Jewish state had “no sovereignty over Al-Aqsa or Jerusalem”.

The White House has announced neither the dates of Obama’s visit, which Israeli media says will begin on 20 March, nor its itinerary.

Obama has repeatedly stated that he is a committed Christian, and there is no credible evidence to the contrary. He was sworn into the Senate on his family Bible, and sworn into the presidency on a Bible used by Abraham Lincoln. He has regularly attended church with his wife and daughters for years. Questions have arisen due to the fact that his biological father had a “Muslim name” and was born into Islam. However, his father had long since left the religion and become an atheist by the time the future president was born. Further, Barack Obama’s mother was a non-practicing Christian, so she raised her son to be spiritual and respect all religions. It was when he went to live with his maternal grandparents, who helped to raise him, that he lived in a home where a religion was observed– Protestant Christianity.