Assad told by Iran ” Lie,until you believe the lies”- cartoon 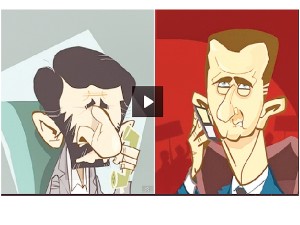 A confused, self-conscious and submissive Syrian president and an all-powerful Iranian leader; both characters in a cartoon video made by Syrian activists, mocking relations between the embattled President Assad and Tehran.

The cartoon’s recent production was reportedly prompted by an announcement from an official close to Iran’s Supreme Leader Ayatollah Khamenei, saying that Syria is the Islamic republic’s 35th province.

The satirical video showed Assad submissive and docile to Tehran and confused on how to deal with his people who are continuously revolting against him.

In a phone conversation sketch with his Iranian counterpart Mahmoud Ahmadinejad, Assad complains and expresses desperation on what to do.

“The nation is against me, they hate me, they no longer love me,” he tells Ahmadinejad.

In return, the Iranian president, who sounds busy and rushed at first, asks him to visit him to offer him a word of advice, all in broken-Arabic.

Chauffeured in a black car in the desert, Assad and Ahmadinejad reach a cave to meet Ayatollah Khamenei.

“Lie, lie until you believe the lies,” Assad repeats his lesson.