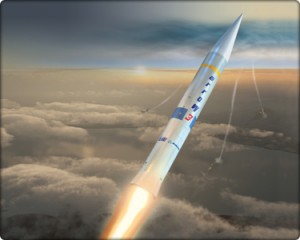 Israel carried out a successful test of its upgraded Arrow interceptor system on Monday, which is designed to destroy in space the kind of missiles held by Syria and Iran, the Israeli Defense Ministry said.

The U.S.-backed Arrow III system deploys “kamikaze” satellites that target ballistic missiles above the earth’s atmosphere, hitting them high enough to allow for any non-conventional warheads to disintegrate safely.

Monday’s test was the first live flight for the Arrow III, but did not involve the interception of any target.

“The test examined for the first time the capabilities and the performance of the new Arrow III, considered to be the most innovative and revolutionary interceptor in the world,” the Defense Ministry said.

A ministry official said the test, which was conducted from a site along Israel’s Mediterranean coast and lasted six and a half minutes, was “100 percent successful”.

In a statement, Prime Minister Benjamin Netanyahu said: “Israel’s hand is always outstretched in peace but we are also prepared for other eventualities. In this vein, I praise the successful test of the Arrow III.”

Designers say the system has proved a success in up to 90 percent of previous tests.

“The success of the test is an important milestone in the operational capabilities of the state of Israel to be able to defend itself against threats in the region,” the ministry statement added.

But the ministry official said the timing of the test, which took months to prepare, was not related to current tensions with Iran or Syria. He said Israel plans another flight test followed by a simulated interception in space over the Mediterranean. 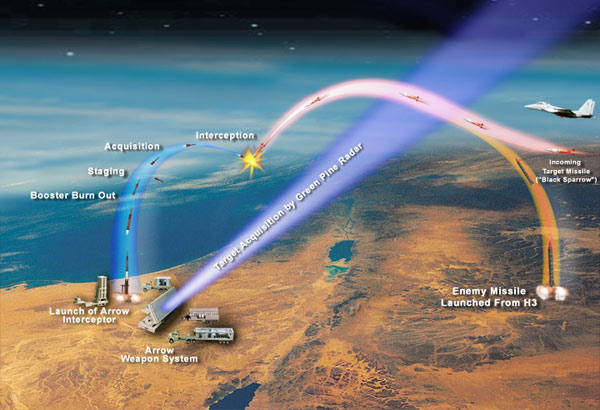 Arrow is the long-range segment in Israel’s three-tier missile shield. This also includes the successfully deployed “Iron Dome”, which targets short-range rockets and projectiles, and the mid-range “David’s Sling”, still under development. They can be deployed alongside other U.S. systems.

Officials say that if Arrow failed to hit an incoming missile at high altitude, there would still be time to destroy it with other systems before it hit its intended target.

The Pentagon and the U.S. firm Boeing are partners in Arrow. Washington has described its support for Israeli missile interceptors as a means of reassuring Israel, which in the past has launched preventative wars against perceived threats, that it has a more passive means of defending itself.

Israel has accused Iran of seeking to build nuclear weapons and has hinted it might strike the Islamic Republic in an effort to halt its atomic program.

Boeing thinks that potential clients for the system may include India, Singapore and South Korea.

“As we prove out that technology, and show that it’s not only affordable but effective, we think there will be additional global market opportunities for that capability,” Dennis Muilenburg, chief executive of Boeing’s Defense, space and security arm, told Reuters last year.

The United States and Israel have been developing Arrow jointly since 1988. Boeing’s counterpart on the project is state-owned Israel Aerospace Industries.

The U.S. financial contribution to progressively improved versions of the Arrow system tops $1 billion, the Congressional Research Service said in a March 2012 report to lawmakers.