Scant hope for a breakthrough, as Iran talks resume 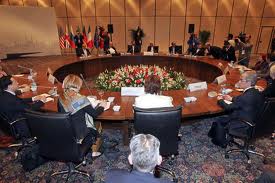 There’s scant hope for a breakthrough next week when negotiators from the U.S. and five other nations meet Iranians for long-awaited talks over the Islamic Republic’s nuclear ambitions, according to current and former Western and Iranian officials.

While a sanctions campaign by the U.S. and European Union has hurt the Persian Gulf state’s economy and reduced its oil revenues, the penalties have yet to persuade Iran to bow to international demands to curtail its atomic program.

The sanctions continue to bite, yet the tension that hung over Iran’s nuclear program last year — when Israel’s leaders raised the threat of a military strike and pressed the U.S. to do the same — has dissipated. More than a dozen Western diplomats and analysts said in interviews that the focus now is on seeking confidence-building gestures to make possible future step-by-step agreements.

“I am not optimistic” about the outlook for a deal “but I am hopeful that, at a bare minimum, they will keep them going and they will set a date and place for the next meeting,” Thomas Pickering, a former undersecretary of state for political affairs and former U.S. ambassador to the United Nations, said in an interview yesterday.

Pickering echoed the sentiments of other former and current U.S. and European officials who said the fundamental obstacle is deep-seated mutual distrust. Talks between Iran and its negotiating partners — the U.S., France, Britain, Germany, China and Russia — resume Feb. 26 in Almaty, Kazakhstan, after an eight-month lapse.

Iran insists its nuclear program is for civilian energy and medical research. The U.S., the EU, and other members of the United Nations Security Council suspect Iran has a covert atomic weapons program.

The U.S. and the European Union are engaged in a dual-track approach to Iran — pursuing nuclear talks while pressing sanctions to try to force Iran to make a deal. A U.S. proposal for a one-on-one meeting with Iran on the sidelines of the Almaty talks remains on the table, according to two U.S. officials who asked not to be named in discussing the offer.

“Sanctions, while they have had powerful effects on the Iranian economy, have not apparently affected the regime’s nuclear calculus,” said Michael Singh, a former senior director for Mideast and Iran policy at the White House under then- President George W. Bush.

So far, “the regime prefers the status quo,” and Iranian leaders are “risk-averse at the moment” because of their own presidential election scheduled for June, said Singh, managing director of the Washington Institute for Near East Policy.

At the same time, some of last year’s anxiety about a possible military strike on Iran’s nuclear facilities has abated because Iran has been careful not to cross red lines set by Israel. Iran has converted some of its medium-enriched uranium into fuel plates for its medical reactor, making it harder to convert that material into bomb-grade fuel.

Even so, Iran is expanding its nuclear program with the installation of more advanced centrifuges, which will multiply its enrichment capability, the UN’s International Atomic Energy Agency reported yesterday.

Israeli Prime Minister Benjamin Netanyahu said after the IAEA report that Iran is “closer than ever to attaining enriched material for a nuclear weapon” and is advancing toward Israel’s “red line,” according to a text message from his office.

One weakness of the dual-track policy under President Barack Obama, critics say, is that with every new sanction the U.S. heralds, Iran suspects the U.S. is not seeking not a deal, but rather is trying to bring down the Iranian regime.

The only way to break the impasse “is to be serious about diplomacy,” which is “difficult, time-consuming, and could take years,” said Vali Nasr, dean of the Johns Hopkins University’s School of Advanced International Studies in Washington and a former senior adviser at the State Department under then-Secretary of State Hillary Clinton.

The U.S. needs to negotiate “in a concrete way” toward eventually lifting oil sanctions and permitting Iran to conduct low-level, 5 percent enrichment solely for power plants, under appropriate safeguards, Nasr, who’s also a Bloomberg View columnist, said in an interview. “If you’re really serious, everyone knows what this deal looks like.”

From the international community’s point of view, Iran has been unwilling to make meaningful concessions. From Iran’s view, the U.S. and its allies want to dictate terms and refuse to recognize what Iran calls its legal right to conduct uranium enrichment for a civilian nuclear program.

Even a slightly sweetened offer from the U.S. and its allies may have little chance. Iranian officials have said they don’t see easing peripheral sanctions, such as those on gold and civilian aircraft parts, as a fair trade for agreeing to give up enrichment of uranium at 20 percent levels. While Iran says it’s making medium-enriched uranium for medical research, that stockpile may be more easily converted into weapons-grade fuel than 5 percent uranium used in power reactors.

“There remains a mismatch between what the two sides are demanding and what they are willing to put on the table,” said Trita Parsi, author of “A Single Roll of the Dice: Obama’s Diplomacy With Iran” and head of the National Iranian American Council. Sanctions have had the opposite of their intended effect and caused Iran to harden its position rather than concede, he said.

Iran’s ambassador to the UN, Mohammad Khazaee, criticized the dual-track policy as “contradictory” and said sanctions undermine rather than encourage diplomacy.

“For some in the U.S., pressure has become an end in itself,” he said in a speech in New YorkFeb. 20. “As long as the U.S. leaders choose to base their policy towards Iran on ‘my way or the highway,’ they should rest assured that Iran would not compromise on its basic rights under pressure or threat.”

Iran’s Supreme Leader Ayatollah Ali Khamenei complained in a Feb. 16 speech that world powers only want the Islamic Republic to bend to their will. “What’s the point of such negotiations?” he said. “This won’t lead anywhere.”

Sanctions proponents, such as Mark Dubowitz, the executive director of the Washington-based Foundation for Defense of Democracies, say that even more pressure is needed.

It’s not surprising Iran is in no mood for compromise, because the country is “closing in on an undetectable nuclear breakout” at which it can produce enough weapons-grade fuel before being detected by UN inspectors or Western intelligence services, Dubowitz said in an interview.