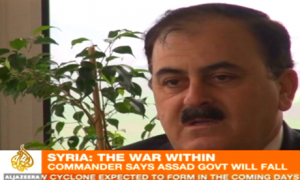 Recent clashes between members of the Free Syrian Army (FSA) and Hezbollah militias across the Syrian-Lebanese border have raised the specter of a regional spillover of the Syrian war, with Lebanon once again being caught in the crossfire.

The threat of war was raised Wednesday by FSA Chief of Staff Brigadier General Salim Idriss. In an interview with Al Arabiya Idriss gave Hezbollah 48 hours to cease its military operations in Syria or face attacks on its installations inside Lebanon.

Prior to that announcement, there have been sporadic cross border clashes between Hezbollah members and the Free Syrian Army.

Since the crisis in Syria began two years ago, the Lebanese government sought to adopt a policy of neutrality Vis-à-vis its neighbor.

In a recent interview with Al Arabiya English’s editor-in-chief Faisal Abbas on the sidelines of Davos 2013 Economic Forum, Lebanese Prime Minister Najib Mikati said: “Lebanon reaffirms its dis-association policy on both the political and security levels in order to maintain stability and avoid related consequences and risks.”

But the explicit stance of Hezbollah that supports the regime of President Bashar al-Assad has undermined that policy and often embarrassed Beirut.

“Hezbollah began by siding with the regime against the Syrian people,” Houry said, adding that the armed Shiite group has used “baseless justifications” to intervene in Syria.

“We as Lebanese agreed through the Baabda Declaration on being neutral regarding all regional crises, except of course when it comes to the Israeli enemy and Hezbollah is implicating Lebanon and itself primarily,” Houry said.

The Future bloc MP said Hezbollah’s justification is that there are Lebanese people who live in villages inside Syria and that those people need protection “as if the existence of Lebanese people in any continent in the world requires the intervention of Hezbollah militias.”

But Qassim Qassir, a Lebanese Journalist and political analyst, played down Hezbollah’s intervention in Syria describing it as mere cross border skirmish with Syrian opposition fighters.

Qassir said the clashes are “natural” given the mix of Syrian and Lebanese residents in border villages. He denied Hezbollah’s latest operations in Syria were encouraged by Iran or were part of a regional strategy.

Qassir, whose views are considered to be close to Hezbollah, blamed “extremist Islamist’ groups within Syria for “pushing the Free Syrian Army” into a wide regional war.

Hakam al-Baba, Syrian journalist and writer, said if the FSA decides to target Hezbollah this would be inside the Syrian territories.

“I think the Syrians are busy fighting their regime and everyone who supports their regime on their territories. They do not have the ability to pursue their enemies outside Syria,” al-Baba said.

If the FSA’s decides to attack Hezbollah, it would be within Syria and not within Lebanon, he added.

But that is in the current stage only, according to al-Baba, who sees the Syrian Free Army pursuing its enemies outside of Syria at a later stage, possibly after the collapse of the Assad’s regime.

Hezbollah’s recent escalated engagement in Syria was seen as sign the Syrian regime is faltering. “The regime has lost a lot, it needs fighters, it was forced to enlist women among its forces, it needs Hezbollah’s assistance,” al-Baba said.

Ali al-Amin, a Lebanese political analyst, said the recent escalation of Hezbollah’s operations in Lebanon is part of an Iranian strategy for Syria.

“There is no doubt that the intervention in Syria contributes to the embarrassment and confusion of the Lebanese Hezbollah, but the interest criteria in this matter are Iranian in the first place and oblige Hezbollah to execute the requirements of this strategy,” al-Amin said.

“There is no doubt that the intervention in Syria contributes to the embarrassment and confusion of the Lebanese Hezbollah, but the interest criteria in this matter are Iranian in the first place and oblige Hezbollah to execute the requirements of this strategy,” Ali al-Amin, a Lebanese political analysts said.

He added that Hezbollah’s direct involvement in Syria now signifies a new chapter of the Iranian strategy in Syria, particularly following the recent killing of Iran’s powerful Revolutionary Guard commander Gen. Hassan Shateri on the road linking Damascus to Beirut.

Iran may also be anxious about the ongoing U.S.-Russian talks on Syria and that it may be sidelined and marginalized if a possible deal was reached between the big powers, according to al-Amin. As a result, the Islamic Republic wants to transmit a message through Hezbollah that its role in any possible solution cannot be overlooked.

That is on the political front. On the logistical one, Hezbollah’s intervention in Syria to “protect” as it claims Shiite Lebanese people who live in Syrian villages could be part of a strategy to create an Allawite enclave for Assad and his inner circle should the rebels overrun Damascus.