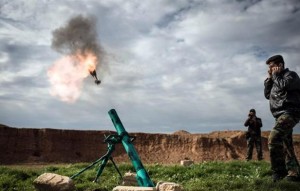 A commander of the Free Syrian Army (FSA) said Syrian rebels had started to attack Lebanon’s Hezbollah Feb. 21, less than a day after the FSA chief of staff issued a 48-hour ultimatum warning the militant group to stop shelling territory held by the insurgents.

“We have bombed the territories of Hezbollah in Lebanon and Syria. The Free Syrian Army will continue bombing these positions,” Col. Hisam al-Avvak of the Group of Free Officers, which operates under the umbrella of the FSA, told Anatolia news agency. Al-Avvak also threatened that the FSA would target Hezbollah strongholds in the south of Beirut unless Hezbollah stops its joint operations with the Syrian army forces.

Gen. Selim Idriss, the FSA chief of staff, said on Feb. 20 that Hezbollah had long been taking part in hostilities in Syria, but had gone too far by shelling villages near Qusayr in Homs province from the Bekaa valley in Lebanon.

The commander said the rebels were giving Hezbollah a 48-hour deadline to stop the attacks and “as soon as the ultimatum ends, we will start responding to the sources of fire.” Rebels in the Qusayr area would be backed by FSA fighters “equipped with long-range weapons from other areas,” he said.

The FSA had also asked the Lebanese president and premier to intervene, Idriss said, but the office of Prime Minister Najib Mikati denied any contact with the Syrian rebels.

Hezbollah has repeatedly denied sending fighters into Syria. Its leader, Hassan Nasrallah, acknowledged in October 2012 that party members had fought Syrian rebels but said they were acting as individuals and not under the group’s direction.

Hezbollah has been supporting Syrian President Bashar Assad ever since the uprising began in March 2011, even though the group supported revolts in Egypt, Tunisia, Libya and Bahrain. The group says it is backing the Syrian regime because of its support for the anti-Israel resistance movements in Lebanon and Palestine and because it is willing to implement political reforms.

A Lebanese analyst ( whose name was withheld for security reasons) told Yalibnan: ” As a Lebanese Shiite myself , I strongly feel that Hezbollah has become an Embarrassment. Hezbollah was my Hero until the Israelis pulled out from Lebanon in 2000 but ever since then it has been downhill for Hezbollah. I pride myself of being a Lebanese Shiite, but I think Hezbollah’s agenda has ceased to be a Lebanese resistance since 2000. Hezbollah is now a proxy of the Wilayat al Faqih ( the basis of the constitution of the Islamic Republic of Iran) which for us as Lebanese Shiites is a step back. Hezbollah is now doing Iran’s dirty work . Look what Hezbollah has allegedly done in Bulgaria, Cyprus, Thailand, Singapore, Kenya, Azerbaijan, India, Georgia , Argentina, Egypt, Bahrain and Iraq. How does this benefit me as a Lebanese Shiite? Hezbollah’s behavior is having a negative impact on all of us as Shiites . We feel this , by the way we are treated wherever we travel.”

He added: As far as the Syrian regime is concerned the writings are on the wall. This regime is bound to fall . Where will this leave us as Shiites if Hezbollah continues to support a failing regime. Unfortunately most people think that if you are a Shiite you are automatically a Hezbollah member, which of course is not the case. Time for Hezbollah to wake up and think Lebanon. This will be better for Hezbollah, better for the Shiites and better for all the Lebanese “.