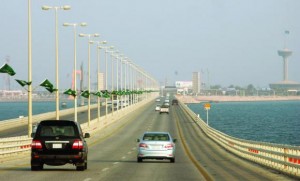 Bahrain police found a bomb planted on a causeway linking the island to Saudi Arabia, and four officers were shot and wounded late on Friday, officials said in the latest violence to rock the kingdom on the second anniversary of an uprising.

The 2 kg bomb, discovered near a mosque on the Bahraini side of the route used by thousands of people every day, was safely defused, said the Information Authority in the U.S.-allied Gulf Arab state.

The attack came a day after Bahraini security forces killed a teenager and injured dozens more during clashes with hundreds of protesters in the capital to mark the anniversary of the pro-democracy revolt, according to opposition websites.

The violence has cast a shadow over talks launched earlier this week between mostly Shi’ite Muslim opposition groups and the Sunni-dominated government to try to end political deadlock in Bahrain, home to the U.S. Fifth Fleet.

Bahrain has seen almost daily demonstrations in the run-up to the anniversary of the revolt, which has put the kingdom on the front line of a region-wide tussle for influence between Shi’ite Muslim Iran and Sunni Arab states such as Saudi Arabia.

Mass protests that erupted in February 2011 at the height of the Arab Spring were crushed, but small demonstrations demanding greater rights for Bahrain’s Shi’ite majority and an end to the absolute power of the Sunni ruling family have continued.

Thousands took to the streets again on Friday, leading opposition group al-Wefaq said on its website, with clashes breaking out with security forces in several villages and districts.