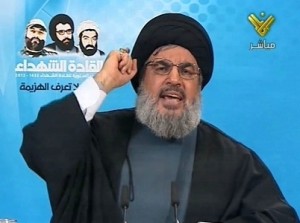 Commenting on Bulgaria’s accusation of the party’s involvement in the Burgas bus attack Nasrallah accused the Lebanese opposition politicians of exploiting it and “readied themselves for the cabinet’s resignation.”

“when Israel wants to wage a war, it does not look for any excuse. Israel has a project and that’s what drives it into a war.”

“The ones predicting an Israeli war on Lebanon are unfortunately Lebanese and some Arab figures, which is based on the alleged accusations against Hezbollah.” He said adding:” They seek to put Lebanon on a terrorist blacklist. ”

He warned Israel against attacking Lebanon :

“I am warning the Israelis and their allies that the Resistance in Lebanon will not keep quiet over any violation that occurs on Lebanese territory.”

“They know that their energy plants and their airports… are under threat . Their power plants would require six-months to be repaired. Can Israel remain 6 months in the dark ?” He added: “Lebanon, on the other hand, is used to being without electricity.”

He said Syria is preoccupied with its own war and is unable at the moment to aid the resistance in Lebanon in a war against Israel, but the resistance has all the arms it needs to fight a war with Israel and does not need to bring in any more arms from Syria or Iran.

Commenting on the discussions about the law that will be used in the 2013 elections he said :

“We also support the Orthodox Proposal because our Christian allies want it , even though we prefer proportionality and a single electoral district.

“Is Saad Hariri upset because we and PSP leader Walid Jumblatt are getting along? Does he want us to fight?

“We are divided over the Syrian issue, should we then move that situation to Lebanon? ”

“It is not in Lebanon’s best interest to move the Syrian crisis to Lebanon.”

“We want a prime minister who lives in Lebanon, who has time for Lebanon and its issues”