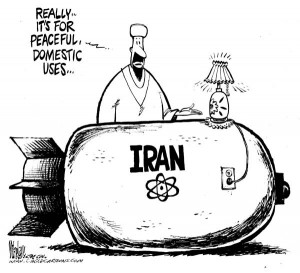 U.N. inspectors returned on Thursday from talks in Tehran with no deal on access to Iran’s nuclear sites and no date for new talks, failing to produce even a small signal of hope for wider big power diplomacy aimed at averting a war.

“Despite its many commitments to do so, Iran has not negotiated in good faith,” said a Western diplomat accredited to the United Nations’ International Atomic Energy Agency in Vienna who was not at the talks. “It appears that we now have to ask ourselves if this is still the right tactic.”

The deadlock is a chilling signal for a wider effort by six major powers to get Iran to curb a program that they fear could give it the capacity to build a nuclear bomb, something Israel has suggested it will prevent by force if diplomacy fails.

The IAEA and Iran “could not finalize the document” setting out terms for an IAEA inquiry into possible military dimensions of Iran’s nuclear program, chief U.N. inspector Herman Nackaerts said at Vienna airport after returning from Iran.

He said no new date had been set for talks that have shown no progress in more than a year, adding: “Time is needed to reflect on the way forward.”

The United States, Russia, China, France, Britain and Germany are due to meet Iran for separate talks in Kazakhstan on February 26 to tackle a decade-old row that has already produced four rounds of U.N. sanctions against Iran.

But the Islamic Republic, which denies any military dimension to its work and is asking for acknowledgement that it is entitled to produce nuclear fuel for peaceful purposes, is heading for a presidential election in June.

That fact alone makes it hard for any official to be seen to make concessions to foreign powers, let alone ones that suit Iran’s enemies, the United States and Israel, which is widely assumed to be the Middle East’s only nuclear-armed power.

“On behalf of the Iranian nation, I say that whoever thinks that the Iranian nation would surrender to pressure is making a huge mistake and will take his wish to the grave,” outgoing President Mahmoud Ahmadinejad said on Thursday, according to state television.

Yet while talks go nowhere, the diplomatic clock is ticking.

Iran is expanding a stockpile of higher-grade 20-percent-enriched uranium ever closer to levels where a critical mass of weapons-grade material would be only a short step away – something that Israel says would be a “red line” for action.

Washington has also warned, in less direct terms, that it will do what it takes to prevent Iran getting the bomb. Late last year it set a March deadline for Iran to start cooperating with the IAEA’s investigation, warning Tehran that it might otherwise be referred to the U.N. Security Council.

Iran was first reported to the U.N. Security Council over its nuclear program by the IAEA’s 35-nation board in 2006, and was then punished with U.N. sanctions, as well as stricter U.S. and European measures targeting its vital oil exports.

In negotiations since January 2012, the IAEA and Iran have been arguing over how the long-stalled investigation should be conducted, prompting Western diplomats to accuse Iran of endlessly playing for time.

Some diplomats and analysts say Iran is using its talks with the IAEA for leverage in the separate negotiations with world powers which, unlike the IAEA, have the power to ease sanctions.

The IAEA’s immediate priority had been to visit the Parchin base southeast of Tehran. It suspects explosives tests relevant to nuclear weapons may have taken place there, perhaps a decade ago, and then been concealed. Tehran denies the accusation.

In a note to member states, the IAEA said it would “continue to work to resolve the remaining differences” and that “the timing for the next meeting will be decided in due course”.

“This conversation is on hold and IAEA won’t make foolish concessions to Iran,” said Mark Hibbs, proliferation expert at the Carnegie Endowment think-tank.

Iran recently sought to garner tens of thousands of specialized magnets that are commonly used in centrifuge machines, sparking concerns that the country is planning a major expansion of its nuclear program.

Purchase orders, copies of which were obtained by the Washington-based Institute for Science and International Security (ISIS) and shown to The Washington Post, show an attempt, by the Iranians, to buy 100,000 ring-shaped magnets.

The magnets are currently banned from export to Iran under a U.N. resolution. However the order was requested from China about one year ago. It is not clear whether the attempt was successful.