Kerry to focus on persuading Syria’s Assad to step down 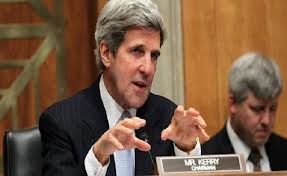 US Secretary of State John F. Kerry said Wednesday that he is drafting diplomatic proposals to persuade Syrian President Bashar al-Assad to give up power, but he warned that it may be too late to prevent a violent collapse in a nation where nearly 70,000 have died and hundreds of thousands have been forced from their homes.

Kerry did not detail any potential offers or arguments to Assad, whom he knew well before the Syrian civil war began nearly two years ago. He hinted that his first trip will be to the Middle East, saying he wants to talk with allies about ways to ease Assad out.

Kerry acknowledged the difficulty of a peaceful transition. “I’m not going to stand here and tell you that’s automatic or easily achievable,” he said. “There are a lot of forces that have been unleashed here over the course of the last months.”

The cautious remarks were another sign that the Obama administration is scaling back its ambitions for Syria while expressing support for the shaky political opposition coalition it helped to establish late last year. A year after declaring that Assad’s days were numbered, U.S. officials no longer put any estimate on how long the Syrian dictator might remain in power.

The United States and key Arab and European partners have ruled out military intervention on behalf of the Syrian rebels who have fought the regime to what is basically a standstill.

President Obama mentioned Syria only briefly in Tuesday’s State of the Union address, lowering expectations he had set in the same speech a year before, when he predicted that Assad would soon be swept away by the tide of change in the Mideast.

“We will keep the pressure on a Syrian regime that has murdered its own people and support opposition leaders that respect the rights of every Syrian,” Obama said Tuesday.

Kerry praised Syrian opposition efforts to negotiate with the Assad regime as courageous, and other U.S. officials said a negotiated deal to give the president asylum outside the country is possible. Assad has rejected previous entreaties, and Russia, considered the best hope to broker a deal with him and provide asylum, has refused to do either.

“We need to address the question of President Assad’s calculation currently,” Kerry said. “I believe there are additional things that can be done to change his current perception. . . . I’ve got a good sense of what I think we might propose.”

U.S. and Arab assessments of Assad’s staying power have shifted, reflecting his resistance to rebel military successes, international sanctions and a steady drip of government defections.

“Assad may think that he can ride this out. We don’t think that’s right. The Syrian opposition is making steady gains,” Nuland said, adding that other countries engaged in trying to end the war agree that Assad is “living in his own fantasy world about his staying power.”

Assad may have good reason to think he can outlast the rebels. He retains a powerful, loyal core within the military and receives weapons and diplomatic protection from Russia and Iran.

Judeh, the Jordanian foreign minister, said: “Nobody can put a timeline. I think people who have done that in the past have proven that they can’t. . . . I think we put all that aside, and we say that there’s a conviction all around that it is a political solution that needs to kick in.”

Photo: US Secretary of State John F. Kerry on Wednesday hosted Jordanian Foreign Minister Nasser Judeh, whose country’s economy is under stress by helping to care for 300,000 Syrian refugees. During a joint press conference Kerry said Syria’s Assad still doesn’t realize he has to go.