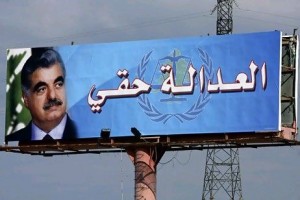 The March 14 opposition alliance will mark the 8th assassination anniversary of former Prime Minister Rafik Hariri at the BIEL exhibition center in downtown Beirut in but the wave of assassinations is keeping the key leaders away.

Former Prime Minister and Future movement leader MP Saad Hariri will address the rally via a video link from Paris on a huge screen . In his speech he will focus on the four-point initiative that he has recently announced, the June elections, the U.N.-backed Special Tribunal for Lebanon, Hezbollah’s arms and the Syrian uprising against President Bashar Assad. He continues to resides in Paris due to security concerns.

NNA also reported that former Lebanese president and Phalange party leader Amin Gemayel, whose son was also assassinated is not expected to attend

Hezbollah has been accused of being behind these threats . The person behind the attempted assassination of MP Harb , Mahmoud al-Hayek has been identified as a Hezbollah member and an arrest warrant has been issued against him but Hezbollah refuses to hand him over to the judicial authorities just like they refused to hand over the four killers of former PM Hariri.

Four Hezbollah members have been indicted by the Special Tribunal for Lebanon (STL) in the assassination of former PM Hariri who was assassinated on Feb. 14 , 2005.

The party denied the charges and has refused to hand over the suspects.

Under the slogan of “Our Dream Will Come True,” the coalition will stress its unity despite the latest differences among its different factions over the electoral draft-law, al-Mustaqbal newspaper reported

Several lawmakers and dignitaries visited Hariri’s gravesite in downtown Beirut Martyrs’ Square ahead of the event to pay tribute to the slain leader.

The rally will kick off at 5:30 pm. Fares Soueid, the coordinator of March 14’s general-secretariat, will be the first speaker to address the rally and will be followed by ex-PM Saad Hariri’s speech via video link.

In a televised speech on the occasion, Hariri’s widow, Nazek Hariri, stressed that the rise of the Lebanese state and its sovereignty cannot be achieved except through dialogue and the protection of the STL.

“We are today on the threshold of a new era of changes which are taking place in our region and the world as a whole. All of us want Lebanon … to pursue its successful experiment in reconstruction and development it achieved under the leadership of [former] Prime Minister martyr Rafik Hariri with the cooperation of its people and their sacrifices,” she said.

“Let’s benefit from the secret of our success and strengthen the substance of life in our country. The rise of the state and sovereignty can be achieved only through dialogue, debate, study and development of visions, cooperation and coexistence and protection of the international tribunal,” she added. “Let’s build for our beloved people a free, sovereign and independent country in Lebanon.”

Also in a televised speech on the occasion, former Prime Minister Fouad Siniora and current head of the Future parliamentary bloc, demanded that the June parliamentary elections be held on time. He said the polls should be an occasion to bring about change in Lebanon by removing Hezbollah and its March 8 allies from the government, blaming them for the deterioration of the country’s economic and security conditions.

In an interview with Future TV Geagea said : “This anniversary has become an historic landmark in Lebanon and led to a major political development with the withdrawal of Syrian forces and the beginning of the Arab Spring, starting from the Beirut Spring.” Geagea acknowledged differences within the March 14 coalition over a new electoral law after the LF and the Phalange Party supported the Orthodox Gathering’s proposal, which calls for every sect to elect its own lawmakers under a system of proportional representation with Lebanon as a single district.

Former president Gemayel told al Mustaqbal newspaper on the occasion: “March 14 is not one single party….Every party has its own personal interests and goals, but these individual goals do not conflict with the March 14 alliance’s aspirations .”