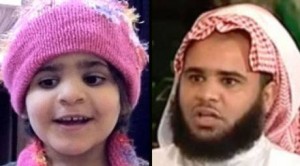 The Saudi royal family has intervened to block the release of a ‘celebrity’ preacher accused of raping, torturing and killing his five-year-old daughter.

Fayhan al-Ghamdi was set to be released after agreeing to pay “blood money” to the mother of his daughter Lama, who suffered multiple injuries including a crushed skull, broken back, broken ribs, a broken left arm and extensive bruising and burns. Social workers say she had also been repeatedly raped and burnt.

Al-Ghamdi, who regularly appears on Saudi television, admitted using a cane and cables to inflict the injuries after doubting his five-year-old daughter’s virginity and taking her to a doctor, according to the campaign group Women to Drive.

The case caused a scandal in Saudi Arabia, with public calls for the cleric to be put to death.

Rather than getting the death penalty or receiving a long prison sentence for the crime, Al-Ghamdi served only a few months in jail before a judge ruled the prosecution could only seek ‘blood money’.

Albawaba News reported the judge as saying: “Blood money and the time the defendant had served in prison since Lama’s death suffices as punishment.”

Today, however, the Saudi Justice Ministry issued a statement saying the cleric remained in prison and the case was continuing.

The Times reported sources in the Saudi capital Riyadh as saying the royal family had been “stung” by the outrage over the case, with senior members intervening to ensure a stricter punishment is given.

One source told the newspaper, “The royal court is now looking at the case. He [Al-Ghamdi] will stay in prison for a long time.”

The £31,000 blood money Al-Ghamdi agreed to pay is considered compensation under Islamic law, although it is only half the amount that would have been paid had Lama been a boy.

Formal objections to the ruling were initially raised by three Saudi activists, and the twitter hashtag #AnaLama (which translates as I Am Lama) was set up.

In response to the public outrage over the case, Saudi authorities set up a 24-hour hotline to take calls about child abuse.