No Obama doctrine on foreign policy in State of the Union

by yalibnan
799
Anyone hoping to hear from President Obama a more overarching foreign policy vision in his State of the Union speech on Tuesday night went home disappointed.
Share: 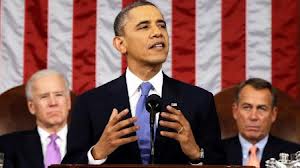 Anyone hoping to hear from President Obama a more overarching foreign policy vision in his State of the Union speech on Tuesday night went home disappointed. Yes, second-term Presidents usually focus on foreign policy. And, yes, Obama just two weeks ago elevated his Deputy National Security Adviser Denis McDonough to be his chief of staff and shuffled his foreign policy team, naming new secretaries of State and Defense and a new head of the CIA. But Obama made it clear that, at least for the first year of his second term, he would be focusing on domestic politics: gun control, immigration, fiscal cliffs and jobs.

What is an Obama doctrine? Thus far, leading from behind — for lack of a better phrase — seems to define his foreign policy. The President is heavy on the covert ops and has pushed allies into places like Libya and Democratic Republic of Congo. He gives technical and humanitarian assistance where needed, like in Syria. But he’s not one to start land wars in Asia — indeed, he swore to end the war in Afghanistan in his speech on Tuesday — or fund guerrilla wars in the name of democracy. What most foreign policy experts say has been lacking is an overarching strategy to deal with the Arab Spring rather than stumbling from one uprising to the next. And this was not something Obama addressed on Tuesday. “An Obama doctrine is still a work in progress,” says Michael O’Hanlon, a foreign policy expert at the progressive Brookings Institution in Washington. “A drone base in Niger or brigade in the Congo, they’re good policy but they don’t have flash and sex appeal, and they distract from his core purpose, which is the economy.”

As the newly minted Secretary of State, John Kerry, noted in his confirmation hearing, the economy is very much a foreign policy issue these days. To that end, Obama made news announcing a new effort for a free-trade agreement with Europe and a trans-Pacific partnership with “the growing markets of Asia.”

Obama also made news chastising the North Koreans for their nuclear test earlier in the day, warning them that their moves “will only isolate them further.” On Iran, he stopped short of again calling for direct talks, which Supreme Leader Ayatullah Ali Khamenei rejected on Feb. 7, but said that “now is the time for a diplomatic solution … and we will do what is necessary to prevent them from getting a nuclear weapon.”

Perhaps the biggest news of the night was his announcement that in a year’s time more than half the remaining U.S. troops — some 34,000 — would be back home “and by the end of next year, our war in Afghanistan will be over,” he said, drawing a standing ovation. Still, many questions remained. Obama “did not really explain what led to the accelerated timetable or how a small residual force could accomplish the ambitious goals he outlined,” says Mike Singh, managing director of the Washington Institute for Near East Policy. “The President has struggled to define publicly his goals for that conflict, much less his strategy for achieving them or how the recent steps he has outlined brings them closer to fruition.”

Much of the foreign policy segment of the speech was defined by what he didn’t mention: for the first time since the U.S. invasion a decade ago, a U.S. President did not mention Iraq in a State of the Union address. Obama was mum on the controversial Keystone-pipeline decision with Canada, Middle East peace, the pivot to Asia and closing Guantánamo. Most notably, he did not utter the words war on terror. “A key question is: Have we dropped the phrase war on terror? Or have we found some clever new phrasing?” says Anthony Cordesman of the Center for Strategic and International Studies. “It won’t change the way we approach the problem, but we have to find a better way to say it.”

Obama noted that al-Qaeda “is a shadow of its former self.” He continued:

Different al-Qaeda affiliates and extremist groups have emerged — from the Arabian Peninsula to Africa. The threat these groups pose is evolving. But to meet this threat, we don’t need to send tens of thousands of our sons and daughters abroad or occupy other nations. Instead, we will need to help countries like Yemen, Libya and Somalia provide for their own security, and help allies who take the fight to terrorists, as we have in Mali. And, where necessary, through a range of capabilities, we will continue to take direct action against those terrorists who pose the gravest threat to Americans.

This was perhaps the closest Obama came to redefining America’s struggle against terrorism — and hinting at his vision. Perhaps next year, when the fiscal cliffs are done and immigration has passed, Obama will finally deliver a doctrine.