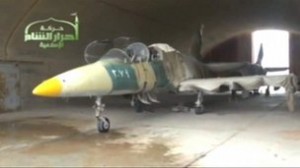 Syrian rebels have captured a military air base near the northern city of Aleppo, activists say.

Fighters took control of al-Jarrah base after days of clashes there with security forces, reports said.

The reported capture comes a day after rebels in the north-east overran Syria biggest hydro-electric dam, delivering a strategic blow to the government.

Turkey’s prime minister meanwhile has said a deadly blast at a crossing with Syria was caused by a car bomb.

At least 10 Syrians and three Turkish nationals died on Monday in the explosion at the Cilvegozu customs post on the Turkish side of the border, in the southern province of Hatay.

“A vehicle loaded with bombs was able to reach our customs gate because the customs gate on the Syrian side is not working and is not being controlled,” Tayyip Erdogan was quoted by AFP news agency as saying.

Turkey is a staunch critic of Syrian President Bashar al-Assad and its territory has been hit intermittently by Syrian shelling and gunfire.

It also provides shelter to tens of thousands of refugees, many of whom pass through the Cilvegozu point.

The Syrian Observatory for Human Rights (SOHR), a UK-based activists group, said rebels killed or held about 40 government troops as they took over al-Jarrah air base.

Amateur video posted on the internet appeared to show rebels overrunning the air base, with helicopters and fighter jets on the tarmac and in shelters.

Last month, rebels took control of the strategic Taftanaz military air base in north-western Syria after weeks of fierce fighting with government forces.

The base had been a logistically important supply centre and housed helicopters which had been used to drop bombs on rebel-held areas in the north.

In another setback to the government, rebels took control of the Thawra dam on the Euphrates in Raqa province on Monday.

The facility provides much of the electricity to the city of Aleppo, which has been fought over to a stalemate between the government and rebel forces since July.

The dam was reported to be still operational, with rebels under orders from their commanders not to interfere with the workers there.

The facility, the result of a major industrial project with the Soviet Union in the 1960s, holds huge symbolic value for the government. It lies on Lake Assad and after the dam was built the town was renamed Thawra – Arabic for revolution – in honour of the the coup which brought Hafez al-Assad to power in 1963.