Another Iranian leader subjected to a shoe attack 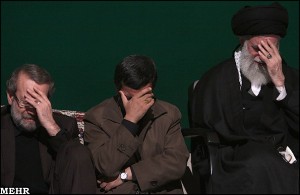 Last week Iranian President Mahmoud Ahmadinejad was subjected to a shoe attack by a Syrian national during his visit to Cairo to participate in the Organization of Islamic Co-operation conference .

On Sunday another Iranian leader was subjected to a shoe attack . This time it was Ahmadinejad’s rival , parliament speaker Ali Larijani according to a report by LBC.

“A group of people, who were followers of President Mahmoud Ahmadinejad, threw shoes at Larijani, while he was addressing a gathering on the occasion of the victory of the Islamic Revolution in Iran. ” The report said

The parliament speaker was forced to cut his speech and leave the place, LBC quoted ILNA as saying .