As was expected the embattled Syrian regime of president Bashar al Assad exploited the controversial visit of Lebanon’s Maronite Patriarch Beshara Rai to Syria to its benefit.

Rai headed to Syria late saturday to participate in the Damascus enthronement of a new Greek Orthodox leader, John Yazigi who took the name of John X and became the Greek Orthodox Patriarch of Antioch and All the East in a Mass at Damascus’ Holy Cross Church on Sunday.

Syrian Deputy Foreign Minister Faisal Meqdad, who was seen on TV footage talking to Rai as they entered the ceremony, suggested Sunday that the patriarch’s visit was a nod of support for the embattled regime.

“Patriarch Rai has corrected the wrong that was done in the past decades,” with the failure of previous patriarchs to come to Syria,” Meqdad said.

This was a direct attack against former Patriarch Nasrallah Boutros Sfeir who refused to go to Syria .

Meqdad added that the turnout at the event “represents a stand in the face of the West, telling them not to interfere in our affairs and stop slaughtering and killing our people, and this is what Patriarch Rai has reiterated.”

He was referring to Rai’s earlier comment that reforms in Syria are “necessary, but should not be imposed from the outside.” 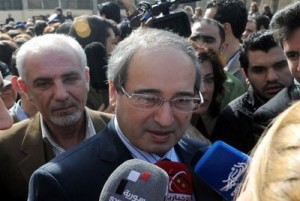 Meqdad welcomed Rai, saying that the people of Syria and Lebanon are one and “Rai is now in his homeland and we welcome him in his country and among his people. We welcome the values, the legacy, the history and civilization he represents.”

Rai is the first Maronite patriarch to visit Syria since the two countries gained independence in 1943. His visit drew the ire of some Lebanese opposition politicians, but he emphasized that it was “merely pastoral” and that he had gone to “meet the Christians, notably the 60,000 Maronites,” stressing that the church is “always against war and for dialogue.”

But March 14 MP Boutros Harb warned Rai earlier that the Syrian regime could exploit such a visit to its benefit:

“I know that the visit is religious, but I fear the Syrian regime will give the trip a political dimension to spread rumors that the Maronite Patriarchate is supporting one Syrian side at the expense of the other, and ultimately engage the church in the Syrian conflict,” Harb told Voice of Lebanon.

Harb also expressed fears that the Maronite church would be pushed into the Syrian crisis.

Harb expressed regret that the Maronites in Lebanon were not united.

“I don’t think that Maronites would be okay if they keep putting themselves in constant conflicts,” he told VOL.

“The Maronite base is in loss” over divisions among political officials, he said.

One analyst commented by saying :

“We have 3 guys in black in lebanon that are trying to dictate our lives.

There is this guy who has been hiding for over six years appears every so often on TV to tell the Lebanese what to to do and then goes back to his bunker . This guy is Hezbollah leader Sayyed Hassan Nasrallah

Then there is the other guy who issued a fatwa against civil mariage and threatened all Muslim politicians who support its legislation and this guy is Grand Mufti Sheikh Mohammed Rashid Qabbani.

He added :”It is about time these guys in black get off our back and stick to spiritual issues and leave politics to politicians ”