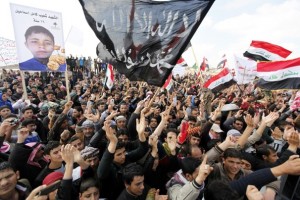 FALLUJAH, Iraq — This restive Sunni town, the first to rebel against U.S. troops a decade ago, is rising up once again, this time against the government the Americans left behind.

In an echo of the Arab Spring protests that have overturned regimes elsewhere in the region, angry residents have been staging weekly demonstrations against the Shiite-led government of Prime Minister Nouri al-Maliki, calling, among a host of other demands, for him to step down and for Iraq’s U.S.-brokered constitution to be replaced.

The Friday protests have also drawn huge crowds in towns and cities elsewhere across the Sunni provinces, as the passions of the Arab Spring collide with the bitter legacy of the Iraq war.

The demonstrations first erupted in December in response to the detention of the bodyguards of a Sunni minister in Maliki’s coalition government, which reinforced widespread Sunni perceptions that the premier is intent on eliminating his Sunni political rivals.

But the protests have evolved into a far deeper expression of the many grievances left unresolved when U.S. forces withdrew a little over a year ago, ranging from abuses committed disproportionately against Sunnis by the Iraqi security forces to what Sunnis perceive to be an unequal distribution of power among the sects.

With their huge turnouts, these largely peaceful protests have the potential to present a far bigger challenge to Maliki’s hold on power than the violent and stubbornly persistent insurgency, which continues to claim scores of lives every month without any discernible impact on the political process.

At a time when civil war is raging in neighboring Syria, the demonstrations also risk becoming embroiled in the wider regional conflict already spilling beyond Syria’s borders.

“It is very dangerous,” said Hamid Ahmed al-Hashem, the head of Fallujah’s local council, who nervously says he supports the protests. “The demonstrators are fed up, and we don’t know for how long they will be patient. Maybe we won’t be able to control them if they get really frustrated.”

In Fallujah, the birthplace of the insurgency against American troops, the dangers as well as the limitations of this Iraqi version of the Arab revolts are apparent.

Friday prayers have become the focus of the protests, as they were in revolts elsewhere, with tens of thousands of people converging on the nearby highway linking Iraq to Jordan and Syria to chant slogans that echo those used around the region.

“Leave, Maliki! The people don’t want you,” the demonstrators shouted at one of the recent gatherings. “The people want to topple the regime,” they chanted.

Evoking Cairo’s Tahrir Square, a half-dozen or so tents have been erected on the edge of the town to serve as impromptu headquarters for the protest organizers, with an Internet connection that young activists use to upload videos of their protests to YouTube.

The protesters say they don’t have leaders, and the Sunni politicians in Maliki’s government have drawn some of the deepest ire. The deputy prime minister, Saleh al-Mutlak, was chased away from the nearby city of Ramadi by rock-throwing crowds when he tried to address the demonstrators; according to a video of the event posted on the Internet, he also seems to have been met with several gunshots.

“We are against all politicians, and the Sunni politicians are the worst,” said Khaled Hammoud, a Sufi sheik who once belonged to the Mujaheddin Shura Council that challenged American troops in 2004; he has emerged as a leading spokesman for the protesters.

“We voted for them to bring us our rights and they failed,” he said.

Hammoud insists that the protest movement is committed to remaining peaceful, a novel concept in a city with a long history of violent rebellion. But the shooting deaths of seven demonstrators late last month by the Iraqi army, in a hail of bullets captured on a YouTube video, illustrated just how easily the unrest could spin out of control.

The Islamic State of Iraq, the umbrella extremist group affiliated with al-Qaeda, is seeking to exploit the heightened tensions. In a statement last week, it called on Sunni protesters to take up arms against the Shiite government. The group has intensified the pace of its attacks in recent weeks, targeting Shiites, Kurds and Sunnis in what looks like an attempt to capitalize on the heightened tensions and reignite the sectarian war that engulfed the country from 2006 to 2007.

In the most recent attack Friday, at least 36 people died in bombings against Shiite marketplaces and a taxi stand in Baghdad, Karbala and Hilla.

The protesters insist that their motives are not sectarian and that their demands for reforms to a corrupt and abusive judicial system will benefit all Iraqis. There have indeed been scattered sympathy protests in some Shiite towns in the south, and several Shiite politicians, including the mercurial cleric Moqtada al-Sadr, have expressed solidarity with the Sunni demonstrators.

The grievances also are real, as was articulated last week in a Human Rights Watch report condemning the “draconian” measures used by the Maliki government to curtail its opponents. The report cited widespread allegations of abuse within the criminal justice system including torture, the rape of female prisoners and arbitrary arrests, as well as the successful suppression of an earlier attempt to organize Arab Spring-style demonstrations in Baghdad and elsewhere in 2011.

But inevitably in Iraq this outpouring of Sunni frustrations is serving to aggravate the sectarian divide opened up by the ouster of Saddam Hussein’s Sunni-minority government and its replacement by one led by Shiites.

By adopting the flag of the former regime, the protesters are proving that they want to turn back the clock to the days when Sunnis ran Iraq, said Maliki spokesman Ali al-Moussawi.

“I can’t say there is no shortfall in the performance of the government, but the problem is that some people believe the natural state of the country is the one that prevailed during the former regime,” he said. “They should have a culture of accepting others, of living together and sharing.”

Maliki has cast the demonstrations as part of a conspiracy hatched by the Sunni governments of Qatar and Turkey, the chief backers of the rebels in Syria, to extend the reach of a largely Sunni revolt into Iraq. He has also accused al-Qaeda and remnants of Hussein’s former Baath Party of stirring the unrest, enraging those who have joined in the protests.

“We were the first to fight al-Qaeda, so how can we now be supporting them?” asked Abdul Rahman Ali Hamadi, 22, a storekeeper who pointed out that Fallujah residents teamed up with U.S. troops to eject al-Qaeda in 2006 and 2007 as part of the Awakening movement. “We paid with our blood to fight al-Qaeda.”

Maliki, who has offered small concessions in the form of a release of prisoners held without charge, appears to be counting on ordinary Sunnis such as Hamadi to tire of the protests. “They will end gradually, not in one day but over time,” Moussawi predicted.

The residents of Fallujah say they won’t give up. They plan to take their protests next week to Baghdad — which would pose a far bigger challenge to Maliki’s government.

“Maliki doesn’t care if people protest in Anbar. It’s too far,” said Mustafa Alani, director of defense and security studies at the

Geneva-based Gulf Research Center. “The secret of any revolution is the capital.”

The closely guarded capital, with its Shiite-majority population, will also present a challenge to the Sunni protest movement, which appears genuinely to want to avoid violence, Alani said.

“Syria is not an inspiration, to be honest,” he said. “Nobody wants to go through that experience. But if Maliki doesn’t respond to these peaceful protests, they could develop very quickly beyond his control into something much more.”