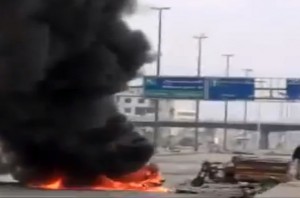 Syrian warplanes have launched air strikes on the outskirts of Damascus, as clashes erupted between government troops and rebels, activists say.

Air raids on Saturday hit the suburb of Zamalka to the east, Douma to the northeast, and there were multiple strikes on the Eastern Ghouta region that runs along the eastern edge of the capital, the Syrian Observatory for Human Rights said.

Warplanes also raided the town of al-Sabineh just south of Damascus, alongside the highway that leads to Deraa province and the town of Moadamiyeh to the southwest.

Fierce clashes broke out between rebels and troops in the embattled town of Daraya, as the army shelled rebel positions there, the Observatory said. Fighting also raged in the eastern Jobar district

The latest fighting in Damascus, some of the heaviest to hit the city since July, began on Wednesday with a series of rebel attacks on regime checkpoints along the main road from the capital to northern Syria.

Previous attempts to advance on the capital have failed. The government controls movement in and out with a network of checkpoints, and rebels have failed so far to make significant inroads.

Pro-regime newspaper Al-Watan said the army was “determined to crush terrorism around the capital and in big cities”.

Fierce battles have erupted over control of the Damascus ring road. On Friday, rebels shut down the road for several hours, activists said.

Fawaz Tello, a veteran opposition campaigner connected with rebels in Damascus, said the operation was part of a slow encroachment by rebels on the capital.

“Even if the rebels withdraw from the ring road, it will become, like other parts of the capital, too dangerous for the regime to use it,” Tello said from Berlin.

“We are witnessing a ‘two steps forward, one step back’ rebel strategy. It is a long way before we can say [President Bashar al]-Assad has become besieged in Damascus, but when another main road is rendered useless for him the noose tightens and his control further erodes.”

In another development, Syria’s information minister said on Friday that the regime is prepared to have dialogue with its political opponents, but without “preconditions”.

Omran al-Zoubi’s comments came on Friday in response to an offer from the opposition leader.

“The door is open, the negotiating table is there, welcome to any Syrian who wants to have dialogue with us. We are serious about the question of dialogue,” Zoubi said on state television.

“When you speak of dialogue, it means dialogue without conditions, which excludes no one. But if someone comes to me and says ‘I want to talk about this issue or I’ll kill you’, that’s not a dialogue,” he said, adding: “There must be no preconditions.”

The opposition Syrian National Coalition said on February 1, the day after an offer of dialogue by its leader Mouaz al-Khatib, that any talks on the country’s political future must be about the departure of Assad’s regime.

Khatib had also called for the release of 160,000 detainees and said he sought dialogue with members of the regime who did not have “blood on their hands”, suggesting that he was ready to meet Assad’s deputy, Vice President Farouq al-Sharaa.

The UN estimates that more than 60,000 people have been killed since the revolt against Assad’s regime began in March 2011.

Photo: Syrian rebels shut down a main highway with a row of burning tires on Friday [AP]