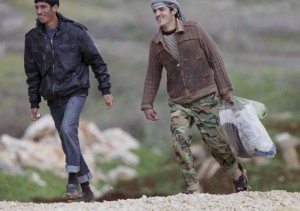 Activists reported heavy shelling by forces loyal to PresidentBashar Assad on opposition-held Ghouta to the east of the city and in neighborhoods to the south in response to an offensive this week by rebel groups trying to remove government checkpoints and seize strategic areas on the capital’s outskirts.

Opposition fighters said they had downed a MIG fighter jet near the suburb of Duma.

The statements were impossible to verify.

Meanwhile, the 5,000 people said to be leaving the country every day, based on figures for January, indicated a 25% increase from the previous month, the United Nations said at a news briefing in Geneva.

Adrian Edwards, a spokesman for the U.N. refugee agency, labeled the increase “a full-on crisis.”

Almost 800,000 Syrians have registered as refugees or are in line to be registered in Lebanon, Turkey, Jordan and Iraq. Several hundred thousand more have fled Syria but have not sought refugee status, experts say, meaning more than 1 million Syrians have left the country since the conflict began nearly two years ago.

The U.N. says the humanitarian situation in Syria is dire. More than 2 million people in the country are displaced from their homes, according to estimates. The U.N. has expressed alarm about possible shortages of food and the breakdown of the nation’s healthcare, water and sanitation systems.

The fighting continues as the international community pushes for a diplomatic solution. On Thursday, at its meeting in Cairo, the Organization of Islamic Cooperation urged “serious dialogue” between the two sides, a prospect that remains unlikely.

Some Damascus rebel groups said they considered the fighting there a final battle for the capital, while other groups distanced themselves from such proclamations amid shortages of weapons and ammunition in the opposition ranks.

Nabil Amir, a spokesman for the Damascus Military Council, a rebel group, said the clashes were an attempt to relieve pressure on the suburb of Dariya, which has been under intense shelling and bombardment by government forces from the nearby Mezze airport for weeks. Government soldiers have attempted to retake Dariya, but have been able only to enter the edges, one opposition activist said.

Activists said more than 50 people were killed Wednesday near the central city of Hama by an explosion at a weapons factory as a bus carrying workers was leaving, activists said. Most of the dead are believed to have been civilian workers from the factory.

No one has claimed responsibility for the attack, which occurred in the government-controlled village of Beraq, and each side blamed the other.