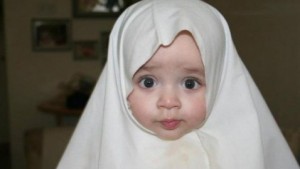 A Saudi cleric has said baby girls should be veiled to avoid sexual harassment, in remarks broadcast on television that sparked outrage in the conservative kingdom.

“Girls should wear the veil from the age of two,” said Abdullah Daoud on Islamic television Al-Majd, adding that Saudis should follow the example of South Asian countries.

“If a girl is sexually desired, her parents should cover her face and force her to wear veil,” to protect her against perverts, he said.

Practicing Muslims believe that girls must begin wearing head covers such as the veil from the age of puberty.

Daoud’s comments, in an interview which was posted on the Internet, sparked an outcry across social networks and the local press, with prominent cleric Salman al-Audah joining the protests.

“We hope that these aberrant statements will not be exaggerated and taken as fatwa (religious edict),” Audah told AFP on Tuesday.

“What level of moral deterioration have such people reached?” asked lawyer Abdulrahman al-Lahim on Twitter, claiming that “sex obsession” is behind such statements.

“The best solution is to exile women, old or young, to remote countries, as long as we have men acting like animals,” wrote female Saudi journalist Halima Muthffar on Twitter.

Women in Saudi Arabia are deprived of many rights that are considered basic elsewhere, including the right to drive, and cannot travel without proper authorisation from their male guardians.