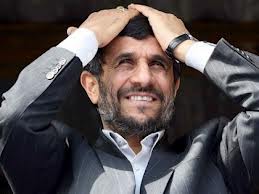 Iranian President Mahmoud Ahmadinejad is in Cairo today for Organization of Islamic Co-operation. It marks the first trip to Egypt by an Iranian leader since the revolution in 1979.

Ahmadinejad’s visit is controversial for a variety of reasons, and tensions have been high during his visit. According to various reports, the Iranian leader was “attacked” outside a mosque in the city this evening.

#BreakingNews: A Syrian has attacked Ahmadinejad in front Al-Hussein mosque in Cairo: reports

Various Arabic language sources say the Iranian leader was confronted by a man with a Syrian accent who tried to hit the man with a shoe. Egyptian security forces took the man away and arrested him.

Iran has historically been one of Syria’s closest allies, and the Iranian government is generally seen as supportive of Bashar al-Assad’s ruling Baath party.

As you may well remember from George W. Bush’s visit to Iraq in 2008, showing someone the soles of your shoe is widely considered a grave insult in Arabic culture.

Here’s video of the incident.

Ahmadinejad’s visit to Egypt has not gone so well, as he was lectured by the top Sunni Cleric, mobbed by aggressive glad-handers, and the fact that someone throw a shoe at him.

Sheikh Ahmed al-Tayyeb, grand imam of Cairo’s Al-Azhar, the highest seat of Sunni Muslim learning warned the visiting Iranian president President that Bahrain is a red line. He also urged the Iranian leader to grant the Sunnis of Iran their full rights .

The trip has not also been for president Morsi, either, who picked an odd time to play host to Ahmadinejad and Iran. Secularists and liberals are already furious with Morsi for allowing his religious Muslim Brotherhood party to take over the revolution, while the mostly Sunni and Salafist parties are appalled at the idea of buddying up to Iran. With protesters spending most of the last two weeks camped outside his house with Molotov cocktails, inviting the most hated guy in the neighborhood to stop by may not have been Morsi’s best political move, according to observers.