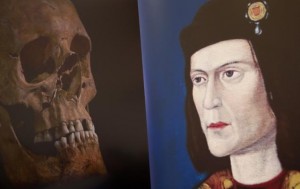 A 500 year old mystery has finally been solved; what happened to the remains of England’s last Plantagenet King, Richard III.

Plantagenet is the family name of a long line of English Kings starting with of Henry II (1154) up to and including the death of Richard III (1485).

The mystery was finally solved after scientists at the University of Leicester confirmed that a skeleton, long buried under a city parking lot is indeed that of Shakespeare’s much-maligned king.

The announcement was made on Monday and with it comes closure to the long-standing question of what followed the killing of Richard III on a battlefield close to 530 years ago.

The skeleton was found in September in a University of Leicester dig on the site of a medieval church called Grey Friars, which is now a parking lot for a social services office.

When found the skeleton had what was thought to be a metal arrow in its back, which may more than likely be a Roman nail, and head injuries – both finds being consistent with records of how Richard III was killed at the Battle of Bosworth in 1485.

The skeleton was also found to have a curved spine, which fits with reports that one of Richard III’s shoulders was higher than the other.

Over the past four months the remains have been subjected to a series of scientific tests, including tests on DNA from the remains. That DNA has since been compared with a sample from a Canadian furniture-maker named Michael Ibsen, 55, who has been confirmed, along with his siblings, as the 17th-generation descendant of Richard III’s sister, Anne of York.

Ibsen said he was stunned when he heard the news.

A Skeletal analysis carried out by a specialist at the university showed that the bones belonged to a male in his late 20s to late 30s. Richard III was 32 when he was killed.

Trauma marks found on the bone show cause of death was the result of one or two wounds to the back of the skull that could have been made by a sword or an ax and that is consistent with accounts of Richard being killed after receiving a blow to the back of his head.

The bones also showed a number of non-fatal injuries including injuries to the head, the rib and one to the pelvis.

Richard III reigned for only two years until his death at Bosworth, which was the last major battle of the dynastic struggle called the Wars of the Roses that were fought on and off from 1455.

Richard was the last king to be killed in battle and his death brought an end to three hundred years of Plantagenet rule and ushered in the rule of the Tudors, starting with Henry VII, who reigned for the next 117 years.

The BBC has a video report on the announcement here