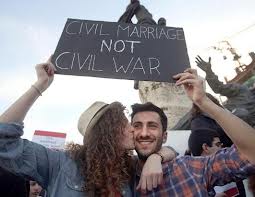 A rally was held on Monday at the Martyrs Square in downtown Beirut to demand the legalization of civil marriage in the country, amid strict security measures by the army and the Internal Security Forces, National News Agency reported.

Demonstrators carried banners that read ” Civil marriage not civil war”, “Towards a Democratic Civil Country that Respects Civil Rights” and “For a Civil Law that Ensures the Rights of Citizens and Allows Civil Marriage in Lebanon.”

Bahjat Salameh, a spokesman for the protesters said during his speech at the rally:

“Today, Lebanese citizens are united in demanding the legalization of civil marriage”, he added.

Another speaker, Roger Bejjani, called on clergymen to “ to stick to religious issues only and to end their control over people’s affairs and their personal choices.” 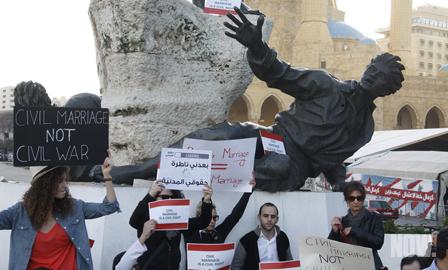 “We are the advocates of a revolution towards an actual, not theoretical, secular state, under the constitution.” Bejjani said

He saluted the couple “Kholoud and Nidal” and said “let them be the Bouazizi of Lebanon.”

Tarek al-Tayeb Mohamed Bouazizi was a Tunisian street vendor who set himself on fire on 17 December 2010, in protest of the confiscation of his wares and the harassment and humiliation that he reported was inflicted on him by a municipal official and her aides. His act became a catalyst for the Tunisian Revolution 2 and the wider Arab Spring, inciting demonstrations and riots throughout Tunisia in protest of social and political issues in the country. The public’s anger and violence intensified following Bouazizi’s death, leading then-President Zine El Abidine Ben Ali to step down on 14 January 2011, after 23 years in power.

The civil marriage issue gained momentum soon after Kholoud Sukkariyah and Nidal Darwish challenged the sectarian personal status code in Lebanon and became the first couple to hold a civil marriage in lebanon. Since then another couple Shaza Khalil and Tony Dagher followed their lead and decided to tie the knot in a civil union.

Approximately 700 couples from Lebanon head to Cyprus only for civil marriages every year, the island nation’s ambassador to Beirut, Homer Mavrommatis, told NOW Lebanon on Monday.