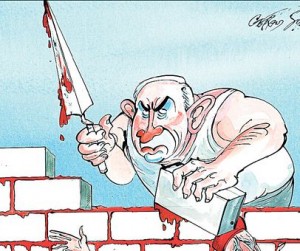 The acting editor of the Sunday Times is expected to apologise personally to the Board of the Deputies of British Jews for publishing a Gerald Scarfe cartoon that has provoked claims of antisemitism, after proprietor Rupert Murdoch branded it grotesque and offensive.

Martin Ivens is due to meet the Jewish organisation on Tuesday afternoon, according to a senior News International insider, less than 24 hours after his boss stepped into the escalating row with an unequivocal apology on Twitter for what he described as a “grotesque, offensive cartoon”.

Scarfe’s cartoon published at the weekend depicted the Israeli leader Binyamin Netanyahu paving a wall with the blood and bodies of muslims. The cartoon shows a menacing looking Netanyahu wielding a blood-splattered trowel, bricking screaming Palestinians into the wall’s structure.

On Sunday night the Sunday Times issued a statement saying it was “a typically robust cartoon by Gerald Scarfe” which was “aimed squarely at Mr Netanyahu and his policies, not at Israel, let alone at Jewish people”. He denied the paper was antisemitic, pointing to a exposé of Holocaust-denying historian David Irving in the paper’s magazine the same day.

However, by Monday night, following a wave of condemnation including from the Deputies of British Jews and Israeli’s UK ambassador, Murdoch intervened with the strongly worded apology on Twitter.

At 6.41pm on Monday, he tweeted: “Gerald Scarfe has never reflected the opinions of the Sunday Times. Nevertheless, we owe major apology for grotesque, offensive cartoon.”

News International will be hoping Murdoch’s apology combined with the face-to-face meeting between Ivens and the Board of Deputies of British Jews will end the affair.

The Sunday Times publisher declined to comment on Murdoch’s apology on Tuesday but a senior insider confirmed Ivens’s meeting with the deputies was due “early this afternoon”.

This marks a fresh approach following an attempt on Monday to contain the controversy with a second, more conciliatory, statement by Ivens, the paper’s longserving deputy editor who is just one week into his new job, who said: “The last thing I or anyone connected with the Sunday Times would countenance would be insulting the memory of the Shoah or invoking the blood libel.

“The paper has long written strongly in defence of Israel and its security concerns, as have I as a columnist. We are, however, reminded of the sensitivities in this area by the reaction to the cartoon and I will of course bear them very carefully in mind in future.”

On Sunday, the Board of the Deputies of British Jews denounced the cartoon’s publication, describing it as “appalling” and “all the more disgusting” for being published on Holocaust memorial day, “given the similar tropes levelled against Jews by the Nazis”.

The organisation said the depiction of a Jewish leader using blood for mortar “is shockingly reminiscent of the blood libel imagery more usually found in parts of the virulently antisemitic Arab press”.

On Monday morning, the row escalated as Israel’s UK ambassador, Daniel Taub, condemned the paper. “The image of Israel’s security barrier, which is saving the lives of both Jews and Arabs from suicide bombers, being built from Palestinian blood and bodies is baseless and outrageous,” Taub said.

“The use of vicious motifs echoing those used to demonise Jews in the past is particularly shocking and hurtful on international Holocaust remembrance day, but the crude and shallow hatred of this cartoon should render it totally unacceptable on any day of the year.”

Scarfe told the Jewish Chronicle on Monday he “very much regrets” the timing of the publication of his cartoon. In a message to the title denying it the right to republish the cartoon, he said he had not been aware it was being published on Holocaust memorial day.

Stephen Pollard, the editor of the Jewish Chronicle, said he would defend any publication’s right to publish cartoons but said he felt this was “disgusting”.

He told Radio 4’s Today programme on Tuesday morning: “I think you have to separate the difference between the right to publish something, and whether you always have to be offensive.

“Clearly there was a mistake made in printing the cartoon. I think the cartoon itself is disgusting. Whether there is a right to publish the cartoon is a different issue, I think it was a misjudgment and News International have handled it absolutely right by apologising.”

In a heated exchange with Pollard, Steve Bell, cartoonist for the Guardian, defended Scarfe: “For once, this wasn’t a bad cartoon. The problem with the state of Israel and the Zionist lobby is that they never acknowledge the crime of ethnic cleansing on which the state was founded.”

Bell was himself the subject of more than 30 complaints to the PCC in November following the publication in the Guardian of a cartoon depicting Netanyahu as a puppet-master operating William Hague and Tony Blair, shown as glove puppets.

Critics, including Mark Gardner of the Community Security Trust, criticised him for applying “the antisemitic trope of Jews as puppeteers, controlling the politicians of ostensibly much more powerful nations”.

Bell said he “completely refuted” he was antisemitic and said he could “not be held responsible for whatever cultural precepts and misapprehensions people choose to bring to my cartoon”. He said it was a comment on Netanyahu who was “one of the world’s most cynical politicians”.

Scarfe, whose career with the Sunday Times stretches back to the 1960s, has never shied away from controversy.

He often makes use of images of blood in his cartoons. Blood is splashed across his website and featured, for example, in a recent cartoon of the Syrian leader Bashar al-Assad, who was pictured as a green, wraith-like creature drinking greedily from an oversized cup labelled “Children’s Blood”.