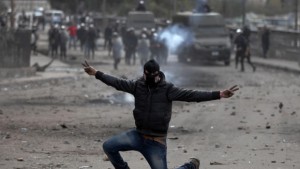 Egypt’s army chief warned on Tuesday that the state could collapse if the latest political crisis roiling the nation drags on, but also defended the right of people to protest.

Troops deployed in the two riot-torn Suez Canal cities of Port Said and Suez stood by and watched on Monday night as thousands took to the streets in direct defiance of a night curfew and a state of emergency declared by the president a day earlier. Residents of those two cities and Ismailiya, a third city also under the emergency, marched through the streets just as the curfew came into force at 9 p.m.

The display of contempt for the president’s decision was tantamount to an outright rebellion that many worried could spread to other parts of the country. Already, protesters across much of Egypt are battling police, cutting off roads and railway lines, and besieging government offices and police stations as part of a growing revolt against the rule of Islamist President Mohammed Morsi and his Muslim Brotherhood group.

At least 60 people have been killed since Friday.

Mr. Morsi’s opponents protest that Islamists have monopolized power and not lived up to the ideals of the pro-democracy uprising that ousted authoritarian leader Hosni Mubarak nearly two years ago.

“The continuation of the conflict between the different political forces and their differences over how the country should be run could lead to the collapse of the state and threaten future generations,” said the army chief, Abdel-Fattah el-Sissi, who is both head of the military and defense minister.

The warning was the military’s first public comment since the latest crisis erupted last week around the second anniversary of the uprising. Mr. el-Sissi was speaking to military academy cadets and the comments were posted on the armed forces’ official Facebook page.

On Sunday night, Mr. Morsi ordered the army to restore order in the Suez Canal cities of Port Said and Suez and slapped a 30-day state of emergency and night curfew on the two cities, as wells as Ismailiya. The army hasn’t deployed in Ismailiya, however, which has seen little of the deadly violence flaring in the other two cities.

On Tuesday, tanks were fanned out on the streets of Port Said, a strategic city of some 600,000 located 140 miles northeast of Cairo on the Mediterranean coast and at the tip of the Suez Canal. New funerals were held for six more of those killed in clashes, with thousands marching and chanting against Mr. Morsi.

The military is Egypt’s most powerful institution and was the de facto ruler since a 1952 coup by army officers seized power and later toppled the monarchy. Generals forced Mr. Mubarak from power at the end of the uprising and then a ruling military council took over from him.

Their nearly 17 months in power that followed tainted the military’s reputation, with critics charging the ruling generals of mismanaging the transition to democratic rule, human rights violations and hauling thousands of civilians before military tribunals.

Mr. Morsi became the first freely elected and civilian president in June and was immediately plunged into a power struggle with the military when it tried to curtail his powers. Two months after he took office, he ordered the retirement of the country’s top two generals, regained powers the generals had taken away from him and handpicked Mr. el-Sissi as defense minister and army chief.

The timing of Mr. el-Sissi’s warning is particularly significant because it came as Mr. Morsi appears to have failed to stem the latest bout of political violence as the country sank deeper into chaos and lawlessness and opposition to Mr. Morsi grew.

Some of the demonstrators in Port Said on Monday night waved white-and-green flags they said were the colors of a new and independent state. Such secession would be unthinkable in Egypt, but the move underlined the depth of frustration in the city.

Mr. El-Sissi acknowledged the difficult challenges facing his troops in Port Said and Suez, and spoke of the “realistic threat” facing the nation as a result of what he called the political, economic and social challenges.

“The deployment of the armed forces poses a grave predicament for us insofar as how we balance avoiding confrontations with Egyptian citizens, their right to protest and the protection and security of vital facilities that impact Egypt’s national security,” he said.

Since coming to office nearly seven months ago, Mr. Morsi has failed to tackle the country’s massive problems, which range from an economy in free fall to surging crime, chaos on the streets and lack of political consensus. His woes deepened when the main opposition coalition turned down his offer for a dialogue to resolve the crisis, insisting that he meets their conditions first.

The wave of unrest has touched cities across much of the country since Thursday, including Cairo, the three Suez Canal cities, Alexandria on the Mediterranean in the north and a string of cities in the Nile Delta.

The violence accelerated Friday, the second anniversary of the start of the uprising, with protests to mark the event turned to clashes around the country that left 11 dead, most of them in Suez.

The next day, riots exploded in Port Said after a court convicted and sentenced to death 21 defendants—mostly locals—for a mass soccer riot in the city’s main stadium a year ago. Rioters attacked police stations, clashed with security forces in the streets and shots and tear gas were fired at protester funerals in mayhem that left 44 people dead over the weekend.