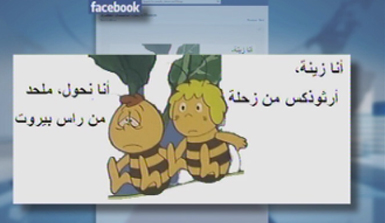 Lebanese citizens who are against the electoral law proposed by the Orthodox Gathering are seeking social network websites to launch their campaign against this proposal.

The bloggers’ posts accuse the Orthodox Gathering proposal of sectarianism and promoting division.

They also criticized the people behind the draft law and its supporters.Some comments ridiculed the law and asked how would an atheist or a family that combines different confessions vote?

Some other comments were furious against proposing a “primitive” law as the Arab World allegedly “witnesses” a revolution.

The protesters called for forming a secular state that represents all the Lebanese people.

Photo: reads right: I am Zeina and Iam orthodox from Zahle ….Left: I am Nahhoul and I am an atheist from Ras Beirut