Over 100 dead in French strikes and fighting in Mali 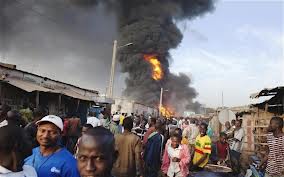 More than 100 people including rebels and government soldiers were killed in Mali during French air strikes and fighting over the strategic town of Konna, Malian military sources and witnesses said on Saturday.

An army officer at the headquarters of Mali’s former military junta in Bamako said nearly 30 vehicles carrying Islamist fighters had been bombed and “over 100” rebels had been killed in fighting.

“We have driven them out, we are effectively in Konna,” Malian Defense Ministry spokesman Lt. Col. Diaran Kone told Reuters. “We don’t know if they have planted mines or other traps, so we are moving with caution. There were many deaths on both sides.”

A shopkeeper in Konna said he had counted 148 bodies in four different locations in the town. Among the dead were several dozen uniformed government soldiers. Others wore traditional robes and turbans.

Fighters from the Islamist coalition that currently controls northern Mali do not wear military clothing.

A resident in the town of Gao, the stronghold of the MUJWA Islamist group, said fighters had begun arriving with their dead on Friday.

“Electric power is available at the mortuary, which is not always the case. And the Islamists have bought plenty of burial mats,” the man said.

photo: Onlookers run from a fire at Ngolonina market in the Malian capital of Bamako