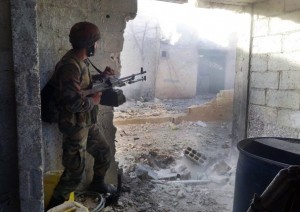 The Syrian military officer walked around for five months carrying a memory stick loaded with family photos in his uniform pocket, waiting for the chance to defect.

When that moment arrived in late December, Brig. Gen. Mohammed Hassoun went to his Aleppo home for lunch, the only brief period during the day when he said he knew he would not be tailed by intelligence agents trying to stop a wave of defections sweeping the Syrian military.

As he recounted in an interview, Hassoun hastily saw his family off in one direction, then donned an old overcoat and sunglasses and took off in a public bus in another.

Ten days later, he rejoined his wife and three sons in Turkey, leaving behind a privileged life but with no regrets about abandoning an institution he served for 31 years.

“I thought the army was built for the purpose of fighting foreign enemies, not targeting our own civilians,” said Hassoun, 49, looking like a prosperous businessman in a black suit.

What appears to be a growing number of defections by senior military, police and intelligence officers suggests the brutal government campaign to quell the 22-month-old rebellion is sapping morale among some of the most elite members of Syrian society.

Although some officers have remained in Syria and are fighting alongside the rebel Free Syrian Army, the Turkish government has established a separate camp for defecting officers. It will not say how many officers it is sheltering, either in the camp or in private houses around the country.

Journalists are not permitted inside the well-guarded camp, making it difficult to judge whether the defections reflect a growing unhappiness with the conduct of the war, which the United Nations estimates has killed more than 60,000 Syrians, or a dawning realization that the rebels may defeat government troops.

One thing few Syrians say it indicates, however, is that the conflict will end soon or before many more Syrians will die. Although the Syrian military has been weakened, by all accounts it remains a formidable force.

“I think it will take more than six months,” said Hassoun, who taught engineering at the Assad Military Academy for about 1,000 army cadets in Aleppo, during an interview at an Antakya cafe. “The regime’s army is strong and well-trained. It has fighter jets and tanks.”

On his way to Turkey, Hassoun said he met FSA soldiers armed only with shotguns.“The regime can do more killing with one airstrike than the FSA can do with many attacks.”

Although his is just one man’s account, Hassoun’s decision to defect, and the dangers it entailed, helps explain why more have not followed suit.

Hassoun said he spent his adult life in the army, entering the Aleppo academy when he was 18.

He said he was optimistic in 2000, when Bashar al-Assad became president. Hassoun hoped the son of the late president, Hafez al-Assad, would usher in reforms for society and the military.

But the uprising was deeply unsettling for career military officers. Protesters in Hassoun’s village were shot at and arrested. His brother was arrested. For a long time, nobody told him anything.

“They didn’t give me any credit as an officer,” he said. “It took three months before I learned he was in prison.”

Hassoun’s oldest son, a university student, was protesting. The son came home one day with his shirt bloodied from the wounds of a fellow protester and made his mother promise not to tell his father. Hassoun learned about it when the family reached Turkey.

He kept thinking that the targeting of civilians would peter out and that he could tolerate being part of an army that was dropping bombs on its citizens.

Instead, it got worse. In July, the army attacked Aleppo.

“I stood there, and in the distance I could see aircraft bombing villages,” he said. “As a soldier and an officer in the army, this is not what we were trained to do.”

From his years in Aleppo, Hassoun knew many people taking part in the uprising. He said he didn’t consider them “terrorists,” as the government labels them.

Hassoun said he knew his decision to leave Syria was risky. Asked what would have happened had his plans been discovered, Hassoun made a chopping movement, his right hand striking the tabletop hard. After some officers defected, he said, their entire extended families were arrested.

“This is the main reason more officers don’t do it,” he said.

Officers were allowed home for lunch to take their families bread in a city where the staple is virtually nonexistent. It was only time of the day when his movements were not monitored, Hassoun said. While there, he disguised himself as an elderly man and saw his family on its way.

With his 50th birthday fast approaching, Hassoun’s life is ruled by much uncertainty. He doesn’t know if his house is standing, or when he can return to Syria, or what he will do if the government is replaced. But he does knows this: He is proud of his 31 years in the Syrian army.

“I wasn’t serving the government,” he said. “I was serving my country. My conscience is clear.”