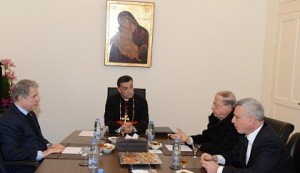 Lebanese Forces leader Samir Geagea did not attend the the Christian summit at Bkirki on Friday for purely security reasons but prior to the summit a bilateral meeting was held between the Lebanese Forces and Free Patriotic Movement to discuss the electoral law issue according to local reports .

Al-Akhbar was told by the Lebanese Forces that its leader did not attend the meeting for “purely security reasons that Maronite patriarch is fully aware of.”

Geagea survived an assassination attempt last April at his residence in Maareb.

Sources of Al Akhbar also said that the talks were not limited to the electoral draft-law, but they also addressed various issues in Lebanon including the Baabda Declaration and the Syrian refugees in Lebanon.