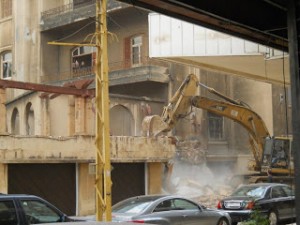 Progressive Socialist Party leader MP Walid Jumblatt denounced the demolition of the house of a prominent Lebanese novelist Amin Maalouf in the Badaro neighborhood of Beirut.

“This act indicates complete disregard toward heritage and the undermining of the remnants of the architectural and social memory of [Beirut],” Jumblatt said in a statement on Tuesday.

He also lashed out at the Beirut Municipality as well as Culture Minister Gaby Layoun for the “neglect” and “the cover up of sporadic demolitions.”

On January 3, the three-story building where Maalouf spent his childhood in Beirut was torn down after an earlier decision by the Culture Ministry to preserve the building was overturned.

Maalouf, born 25 February 1949 in Beirut, is a Lebanese-born French author. Has lived in France since 1976. Although his native language is Arabic, he writes in French, and his works have been translated into many languages

”The Lebanese-born French citizen is best known for such works as “Leo Africanus” and “The Rock of Tanios,” for which he received the prestigious 1993 Prix Goncourt.

According to National News Agency, Maalouf is the first Lebanese to join the elite ranks of the French Academy, which is the foremost authority on the French language. He succeeds the anthropologist Claude Levi-Strauss.