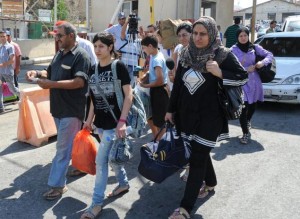 Lebanon, now a haven for 170,000 Syrians fleeing civil war, has asked foreign donors for $180 million to help care for them and said it will register and recognize refugees after a year-long hiatus.

The Beirut government has officially sought to “dissociate” itself from the 21-month-old struggle in Syria, nervous about the destabilizing impact of the increasingly sectarian conflict in its bigger neighbor on its own delicate communal balance.

But there has been pressure from humanitarian agencies and the public to do more to help Syrian refugees in Lebanon.

The cabinet, which approved the measures after a six-hour session on Thursday night, rejected a proposal by Energy Minister Gebran Bassil, a Christian, to close the border to stop the influx into Lebanon, where mainly Sunni Muslim Syrian refugees now account for almost 5 percent of the population.

However, Hezbollah leader Hassan Nasrallah said in a speech on Thursday that the border should stay open for refugees.

Social Affairs Minister Wael Abu Faour told reporters after the cabinet debate: “The Lebanese state will register the refugees…and guarantee aid and protection for the actual refugees in Lebanon.”

Until now Syrian refugees have found shelter with local communities in Lebanon, rather than being housed in camps, as in the other two main host countries, Jordan and Turkey. Abu Faour did not say if camps would now be constructed.

Lebanon’s ambivalent attitude to the new arrivals is partly a legacy of its own 15-year civil war, a conflict fuelled by sectarian tensions which linger on, especially over the presence of 400,000 Sunni Palestinian refugees in the country.

Ninette Kelley, representative of the U.N. refugee agency (UNHCR) in Lebanon, said the government’s action was “the first concrete plan” it had presented to the international community.

She said Lebanon had previously given formal recognition to Syrian refugees who entered via official border points, but not to those who had crossed illegally, either because they feared authorities or to escape violence near their homes.

This group accounts for around 30 percent of all Syrian refugees in Lebanon and the government’s decision should allow them to register for legal refugee status, Kelley said.

“Initially the government jointly registered Syrian refugees with UNHCR through its High Relief Commission. It stopped in 2011 as the numbers became larger due to insufficient capacity,” she said, adding that joint registration would now resume.

The United Nations says more than 560,000 Syrians have fled abroad. In Lebanon, many not hosted by friends or relations live in shacks of wood and plastic sheeting. In the southern city of Tyre, they brave the winter cold and wash in the sea.

Lebanese politics is marred by sectarian divisions that have been inflamed by the mainly Sunni revolt against Assad, whose minority Alawite sect is derived from Shi’ite Islam.

Syria-related violence has flared periodically in the northern port of Tripoli, which has a Sunni majority and an Alawite minority, as well as in Beirut and Sidon in the south.

Assad’s Lebanese opponents blame Syria, which stationed troops in Lebanon from 1976 to 2005, for the unresolved killing of Lebanese security official Wissam al-Hassan in October.

Hassan had been leading an investigation that implicated Damascus and Hezbollah in the 2005 assassination of former Lebanese prime minister Rafik al-Hariri, a Sunni.