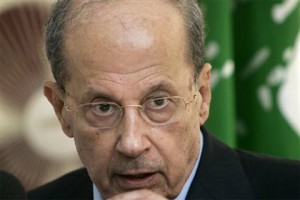 Change and Reform bloc leader MP Michel Aoun , whose ministers voted in the cabinet for the electoral law which is based on proportionality said that he now considers the proposal put forward by the Orthodox Gathering and the Maronite Church as the best option for a revised electoral law in Lebanon.

“The best electoral law is the Orthodox Gathering proposal and the second best is the law based on proportionality,” Aoun said following his bloc’s weekly meeting on Thursday.

He continued: “In the next parliamentary session, the Orthodox proposal must be discussed.”

The new electoral law was approved by the majority of ministers, including the FPM ministers . However the ministers that represent Progressive Socialist Party leader MP Walid Jumblatt’s bloc voted against it.

Jumblatt and his PSP MPs favor the current 1960 winner take all electoral law.

But Hezbollah which currently dominates the cabinet as well as the maronite Patriarch reject the 1960 electoral law.

Aoun blamed the current poor economic situation in the country on the Arab countries and Turkey.

Those who are blaming the government for the poor economic conditions and lack of tourists are ignorant … the pro Syrian uprising Arab countries and Turkey are the ones to be blamed because they do not want stability for Lebanon”. He said.

Aoun commented on the Syrian refugees issue, by saying that “the land and the resources have run out and we cannot blame Syrians if they steal, what else can they do?”