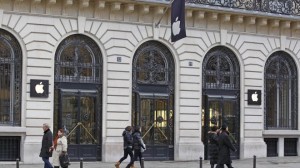 The French press reported that up to a million Euro ($1.3 million) in goods were stolen at the store selling products such as Apple’s iPhones and iPads behind the Paris Opera house, a figure police would not immediately confirm.

Police said Tuesday the theft occurred about 9 p.m. Monday, 3 hours after closing, while police were deployed around the famed Champs-Elysees Avenue where revelers traditionally gather on New Year’s Eve.

Christophe Crepin of the Unsa police union said the “well planned” operation was carried out by four masked and armed individuals.

The daily Le Parisien reported the thieves entered the store  after  threatening a security guard at a back entrance.