Hillary Clinton Is Hospitalized for a Blood Clot 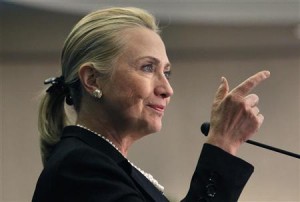 Secretary of State Hillary Rodham Clinton was hospitalized on Sunday with a blood clot stemming from a concussion she suffered earlier this month, a State Department spokesman said.

Mrs. Clinton, who canceled most of her public events in recent weeks because of her concussion, was at a follow-up exam Sunday when doctors discovered a blood clot, according to Philippe Reines, a spokesman for Mrs. Clinton.

“She is being treated with anticoagulants and is at New York-Presbyterian Hospital so that they can monitor the medication over the next 48 hours,” Mr. Reines said in a statement.

“Her doctors will continue to assess her condition, including other issues associated with her concussion,” Mr. Reines said. “They will determine if any further action is required.”

Aides had said that Mrs. Clinton became ill and dehydrated earlier in December and fainted and hit her head, suffering a concussion. Among the events she missed because of the injury was a Congressional hearing into the attack on the United States Consulate in Benghazi, Libya.

The fainting episode occurred after Mrs. Clinton became dehydrated because of a stomach virus she contracted during a trip to Europe, according to statement released by a close adviser and her doctors.

State Department officials said Mrs. Clinton fainted when she was alone at her home in Washington but added that the concussion was not diagnosed immediately. She canceled an overseas trip, and Victoria Nuland, a State Department spokeswoman, gave a mixed picture about the severity of her illness, first describing her as having a “very uncomfortable stomach virus,” and then saying she was “under the weather.”