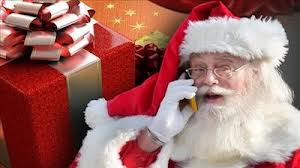 Volunteers at a Colorado Air Force base monitoring maps showing Santa Claus’ progress are several hours into their goodwill mission and have answered more than 24,000 phone calls from children wanting to know everything from old Saint Nick’s age, to how reindeer fly, to when they can expect their presents.

But NORAD has some fresh competition: Google has unveiled a new Santa tracker this year. As CNET reports, Google Maps engineers developed a new route algorithm that will let users track St. Nick’s journey on a special Santa Tracker page.

“Google has been tracking Santa via Google Earth since 2004,” CNET’s Don Reisinger notes. “This is the first time the company has launched a broader Santa Tracker tool that competes with NORAD’s perennial favorite.”

The NORAD maps show Santa is in Pakistan and heading west. He has delivered more than 2 billion presents so far, according to the “NORAD Tracks Santa” website.

Volunteers started taking calls at 4 a.m. Mountain time on Monday and will keep updating until 3 a.m. on Christmas morning.

NORAD Tracks Santa began in 1955 when a newspaper ad listed the wrong phone number for kids to call Santa. Callers ended up getting the Continental Air Defense Command, NORAD’s predecessor, and a tradition was born.

Merry Xmas and a Happy new Year to all our readers worldwide . To those who don’t celebrate Xmas ….. Happy holidays!!!