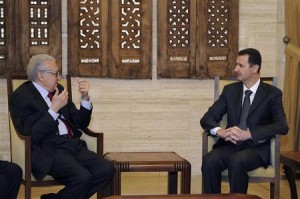 Kuwait will host an international conference next month to tackle Syria’s humanitarian crisis, the ruling emir said on Monday, as foes of President Bashar al-Assad voiced frustration with international efforts to end the civil war.

In Damascus, special international envoy Lakhdar Brahimi met Assad but the Syrian opposition vented its anger at what it called a “silence” over the unabated killing of civilians by government forces, most recently in the central town of Halfaya.

Assad is under growing pressure from rebel forces in the 21-month-old war that activists say has killed more than 44,000 people. However, diesel from his main international ally, Russia, has arrived in Syria, providing the first significant amounts of the fuel in months to power industry and the military, generate electricity and heat homes during the winter.

Russian Foreign Minister Sergei Lavrov also said he did not believe Assad’s government would use chemical weapons, in remarks broadcast shortly after activists released reports of what they said was a poison gas attack in the city of Homs.

Kuwait’s emir, Sheikh Sabah al-Ahmad al Sabah, said the conference for Syrian donors would be held in late January in response to an invitation by U.N. Secretary-General Ban Ki-moon.

“The Syrian wound is still bleeding, and the killing machine still continues, killing dozens of our brothers in Syria each day,” the emir told a meeting of the Gulf Cooperation Council in Bahrain.

Last week, the United Nations appealed for $1.5 billion to help save the lives of millions of Syrians suffering a “dramatically deteriorating” humanitarian situation. The appeals are to help 4 million people within Syria and up to 1 million Syrian refugees in five other countries until next July.

Underlining how rebels are taking the battle close to Assad’s doorstep, U.N. and Arab League envoy Brahimi had to drive overland to Damascus from Lebanon on the eve of his meeting with the president because fighting around the international airport has made it impossible to fly in.

Brahimi said his talks with Assad had dealt with possible solutions to a crisis. “I told him what I was seeing abroad and about the meetings I had with different officials in the region and abroad,” he told reporters. “The situation in Syria still is a reason for worry. We hope that all the sides work toward the solution, as the Syrian people want.”

Syria’s opposition fumed at what it called silence over the unrelated killing of civilians by Assad’s forces. On Sunday, dozens were killed in Halfaya and many more wounded. Activists blamed an air strike on a bakery where a crowd was queuing in the town, which was seized by insurgents last week.

“Silence over the massacres committed against the Syrian people is blackmail and a means to pressure the people, their revolution, and their leaders,” said Moaz Alkhatib, who heads the opposition National Coalition.

However, Alkhatib did not accuse anybody directly for remaining mum over what would be one of the deadliest air strikes of the civil war.

Activists also said rebels in central Hama province shot down a government fighter jet on Monday during clashes outside a village loyal to Assad. Rebels have captured a string of military compounds around the country. Damascus is now being dragged into the conflict, with fighting in its southern districts and the suburbs on its eastern outskirts.

Brahimi’s plan for an end to the Syrian crisis centres on a transitional government, but has left vague Assad’s role. The opposition rejects anything but Assad’s overthrow and says the government crackdown has been too fierce to accept dialogue.

With rebel gains growing, the army has been increasingly relying on its superior weaponry. It has used air strikes and even long range, Scud-type missiles, according to U.S. and NATO reports.

Western powers have warned Assad that using chemical weapons would be a “red line”, which they implied would draw international involvement in the conflict. Syria repeated on Sunday that it would never use chemical weapons against its people.

In Moscow, Foreign Minister Lavrov told the Russia Today (RT) television channel that recent signs that parts of Syria’s chemical arsenal were being moved – a development that alarmed Western governments – was an effort by the government to make the weapons more secure.

“Our information is … that the latest reports about some movement of the chemical weapons was related to steps undertaken by the government to concentrate the chemical stuff … at two sites, to make sure it is absolutely protected,” he said.

This correlated with information the Americans had, he said.

The activists’ reports of what they said was a poison gas attack in Homs could not be confirmed, as the government restricts media access in Syria.

The Syrian Observatory for Human Rights gathered activist accounts of the incident, which said that six rebel fighters were killed after inhaling smoke on the front line of Homs’s urban battleground.

The Observatory, a British-based group with a network of activists across the country, called on the International Committee of the Red Cross to send a medical team to the area to determine what had happened.

An Italian shipowner said two cargoes of Russian diesel had reached the Syrian port of Banias this month. It was unclear who was behind the shipments and there was no evidence they violated international sanctions against Syria.

“(Our vessels) loaded two cargoes of gasoil in Russia at the beginning of December for delivery to the East Mediterranean. The charterer then asked us to deliver the volumes to Banias,” said Paolo Cagnoni, who heads Mediterranea di Navigazione S.p.A., the family-run Italian tanker firm.

He declined to disclose the names of the vessel charterers and the recipient of the deliveries, which amount to around 42,000 tonnes of gasoil worth close to $40 million at current market prices.