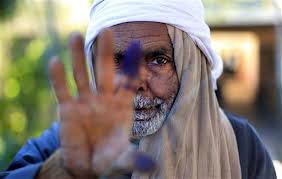 Egypt extended voting by four hours on Saturday in the second and decisive round of a referendum that was expected to approve the country’s new Islamist-drafted constitution after weeks of protests and violence.

It will help restore the stability needed to fix an economy that is on the ropes, they say.

But the opposition says the document is divisive and has accused Mursi of pushing through a text that favors his Islamist allies while ignoring the rights of Christians, who make up about 10 percent of the population, as well as women.

“I’m voting ‘no’ because Egypt can’t be ruled by one faction,” said Karim Nahas, 35, a stockbroker, heading to a polling station in Giza, a province included in this round of voting which covers parts of greater Cairo.

At another polling station, some voters said they were more interested in ending Egypt’s long period of political instability than in the Islamist aspects of the charter.

“We have to extend our hands to Mursi to help fix the country,” said Hisham Kamal, an accountant.

Queues formed at some polling stations around the country and voting was extended by four hours to 11 p.m. (2100 GMT).

Unofficial tallies are likely to emerge within hours of the close, but the referendum committee may not declare an official result for the two rounds until Monday, after hearing appeals.

As polling opened on Saturday, a coalition of Egyptian rights groups reported a number of alleged irregularities.

They said some polling stations had opened late, that Islamists urging a “yes” vote had illegally campaigned at some stations, and complained of irregularities in voter registration irregularities, including the listing of one dead person.

The first round of voting last week resulted in a 57 percent vote in favor of the constitution, according to unofficial figures.

Analysts expect another “yes” on Saturday because the vote covers rural and other areas seen as having more Islamist sympathizers. Islamists may also be able to count on many Egyptians who are simply exhausted by two years of upheaval.

Among the provisions of the new basic law are a limit of two four-year presidential terms. It says the principles of sharia law remain the main source of legislation but adds an article to explain this further. It also says Islamic authorities will be consulted on sharia – a source of concern to Christians and other non-Muslims.

If the constitution is passed, a parliamentary election will be held in about two months. If not, an assembly will have to be set up to draft a new one.

After the first round of voting, the opposition said a litany of alleged abuses meant the first stage of the referendum should be re-run.

But the committee overseeing the two-stage vote said its investigations showed no major irregularities in voting on December 15, which covered about half of Egypt’s 51 million voters.

There was no indication on Saturday that the alleged abuses were any worse than those claimed during the first round.

Even if the charter is approved, the opposition say it is a recipe for trouble since it has not received broad consensus backing from the population. They say the result may go in Mursi’s favor but it will not be the result of a fair vote.

“I see more unrest,” said Ahmed Said, head of the liberal Free Egyptians Party and a member of the National Salvation Front, an opposition coalition formed after Mursi expanded his powers on November 22 and then pushed the constitution to a vote.

Protesters accused the president of acting like a pharaoh, and he was forced to issue a second decree two weeks ago that amended a provision putting all his decisions above legal challenge.

Said cited “serious violations” on the first day of voting, and said anger against Mursi and his Islamist allies was growing. “People are not going to accept the way they are dealing with the situation.”

At least eight people were killed in protests outside the presidential palace in Cairo this month. Islamists and rivals clashed on Friday in the second biggest city of Alexandria, hurling stones at each other. Two buses were torched.

The head of the Muslim Brotherhood, an Islamist group that represents Mursi’s power base, said the vote was an opportunity for Egypt to move on.

“After the constitution is settled by the people, the wheels in all areas will turn, even if there are differences here and there,” the Brotherhood’s supreme guide, Mohamed Badie, said as he went to vote in Beni Suef, south of Cairo.

“After choosing a constitution, all Egyptians will be moving in the same direction,” he said.

The vote was staggered after many judges refused to supervise the ballot, meaning there were not enough to hold the referendum on a single day nationwide.

The first round was won by a slim enough margin to buttress opposition arguments that the text was divisive. Opponents who include liberals, leftists, Christians and more moderate-minded Muslims accuse Islamists of using religion to sway voters.

Islamists, who have won successive ballots since Mubarak’s overthrow, albeit by narrowing margins, dismiss charges that they are exploiting religion and say the document reflects the will of a majority in the country where most people are Muslim.