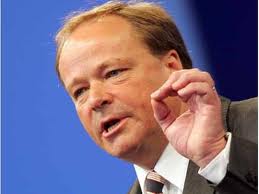 Drik Niebel , Germany’s Federal Minister of Economic Cooperation and Development who arrived Saturday afternoon in Lebanon held a press conference at the Phoenicia hotel in Beirut prior to departing to Germany.

During his press conference he announced that Germany will donate 6.1 million US dollars for the Syrian refugees in Lebanon.

According to a statement from United Nations International Children’s Emergency Fund (UNICEF), Niebel will take a close look at the activities of the United Nations Relief and Works Agency (UNRWA)– the U.N. body tasked with Palestinian refugee affairs – and the relief effort to Syrian refugee children by UNICEF.